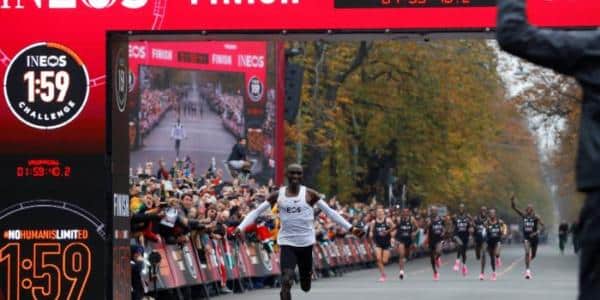 ALSO READ  Kipchoge’s INEOS 1:59 Challenge: Its All About Business/Money

Symmonds, a 35-year-old middle-distance runner who’s competed at the Olympics and was the 2007 Boston Indoor Games gold medalist, was convinced that he had it in him to attempt the historic feat.

He got himself a pacer, another athletic legend, to guide him, but ran out of breath after covering a paltry 1,029 meters.

In a video posted on YouTube, the athlete admitted that the challenge was not as easy as he had anticipated.

“For me, at that pace, it felt like an all-out sprint. Just 90 seconds in, my heart rate was nearly 200 beats per minute. I was ready to call it after a minute,” he gasped from the ground after his run.

According to the highly acclaimed Runners World, a website that addresses all issues running, Kipchoge held a sub-4:34 pace over the 42km, making him the fastest man ever to run that distance.

“He hit the 21km mark in 59:35, giving him some breathing room for reaching the two-hour goal, with most of his kilometre splits not wavering between 2:48 to 2:52 per kilometer—from 33km to 40km, he hit 2:50 exactly for every split,” they analyzed.

Having tried the challenge first-hand, Symmonds was forced to agree that indeed what Kipchoge attempted was out of this world affair.

“That has got to be the greatest accomplishment by a human being in the history of the world,” he confessed.

Kipchoge covered 42 kilometers in 1 hour, 59 minutes and 40 seconds, effectively becoming the first person on record to achieve such a feat.