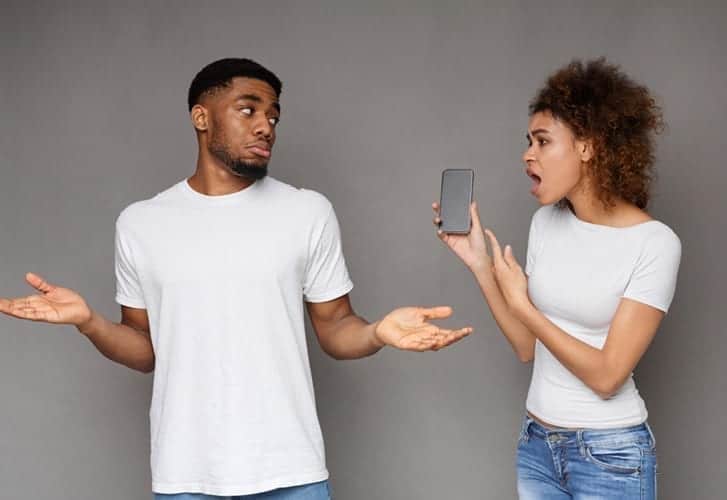 A few months ago, my husband added a password to his phone. Ever since, I cannot read his text messages or see his call log and he has refused to share his password. He has also become protective of the phone. I think he is hiding something or someone from me. If not, why is he being so secretive about his phone? I smell a rat. Sometimes I feel like banging his phone on the wall. I always felt better when I had access to his phone and could keep tabs on who was calling and texting him. I don’t understand what is going on but I am almost certain he is hiding another woman from me. Please advise me.

What the readers say:

Though it may be true that the main reason men and women add security codes to their phones is to protect their illicit relations, you should know there are other reasons for the same. His body language, other than the password, should communicate as much. Secondly share with him, candidly, your discomfort with the action. Finally, if nothing seems to be working out, either accept things as they are and continue or quit, before your anxiety either kills you or wrecks the marriage.

Women think that men are always out to cheat. My thinking is that he or she who cheats is usually sure that her partner is also cheating on her or him. How would you feel if you found your man going through your phone? Going through his phone is invading his privacy. If he is a true cheat then his forty days will come to an end.  Remain sober in handling this situation because it can put your marriage to an end.

Men who put security codes in their phones have more than one partner. It is clear that he is hiding something from you. He may be having an affair. Ask him he keeps his phone locked yet there is nothing too personal between both of you.

Suspicion is the bedrock of most broken marriages. When trust fails, relationships seldom hold. Engage your husband directly and be as open as possible. Show love, care and understanding.  Win his heart back by doing great things that attracted him to you. Above all, pray because God is the institutor of marriage. He is love and will restore love to your marriage.

While people in marriage should be as open as possible there is nothing wrong in having personal boundaries. For instance prying into your spouse’s work computer and diaries.

Mobile phones are increasingly becoming personal because of the information we store in there. They have become our directories, diaries, communication file among other things. Phones are like our purses or wallets or even personal drawers. For this reason many people would not be very comfortable to have their phones easily accessible. This may not necessarily mean that those individuals are cheating.

What is so notable, is your desperate desire to access that phone. This points out a deep trust problem. Something could have triggered your suspicion and you wanting the phone is to help you gather evidence.

If there is any of such suspicion I suggest you raise the matter with him. You are better off discussing your worries with your husband than being a snoop, especially if you are caught spying. It just reflects negatively on you and nobody likes to lose face. It even gets worse if your suspicion was baseless.

The other thing that this phone issue is bringing to the fore is your own insecurities. These are feelings of inadequacy. That constant feeling that you are not good enough and that you are always falling short. This will only choke your relationship. Accept and celebrate yourself. Know that you are in that relationship because you are good enough. Your husband is with you because he wants to be with you and not because he has not found someone else.

Avoid thoughts that belittle and practice cheering yourself up. With time the urge to check through that phone will go.

Hilda Boke Mahare has a background in Counselling Psychology

Before we start investigating to see if something suspicious is going on, there are a few generalities we need to agree on; one, that a mobile phone is a personal item; two, having a password on his text messages is a personal decision and not necessarily an indicator of dubious business; three, banging his phone against a wall will not crack the password open nor solve any of your problems if anything it will only aggravate the tension and increase your expenditure and four, his phone password is just one of many other passwords you don’t have (personal email, office email, secret email, Facebook, Skype, chat among many others). Actually the ones you don’t know and don’t have access to are much cheaper and have far greater capabilities than text messages. Five, fishy text messages are deleted as soon as they are read so even if you got one or two, they would just be a small tip of the iceberg.

He is not being secretive about anything; he is just defining his privacy. As a matter of fact, you could have brought this upon yourself by always snooping around his phone, checking on his text messages and call logs and asking those ridiculous questions women like to ask about any text message they come across that has a female link.

Being a member of society men and women alike are bound to send and receive text messages to both men and women. When someone then goes through the text messages asking all manner of questions then it becomes annoying and the best way to maintain ones sanity is to limit or prevent access all together. If anything, the best way to catch a cheating spouse through his or her phone details is to give them the satisfaction that you would never check or snoop around it then they may not always be too careful with it. The more you snoop, the more caution they observe.

There is no definite answer to this question and having a password neither confirms nor negates the presence of one or several illicit affairs. However, if he is cheating, it will come out someday. There is absolutely no need to be confused about what is happening or even to trouble yourself seeking to know if he is having an affair or not. These things will always come out in due time. Nothing can be concealed forever. Until then, you will be wasting your time and putting yourself through unnecessary emotional stress.

Marriages are built on trust and every partner should have their degree of privacy, freedom and leverage. If he comes home at 2am, it does not necessarily mean he is coming from another woman’s house, he could have just been out drinking with his friends. Trust is the cement that holds marriages together and without it, with or without a reasonable cause, any marriage is bound to fail.

By Simon and Boke

Simon Anyona is a relationships counsellor