VIDEO: Sifuna Captured Issuing Orders For Khalwale,Barasa to be Chased From Kibra

VIDEO: Sifuna Captured Issuing Orders For Khalwale,Barasa to be Chased From Kibra 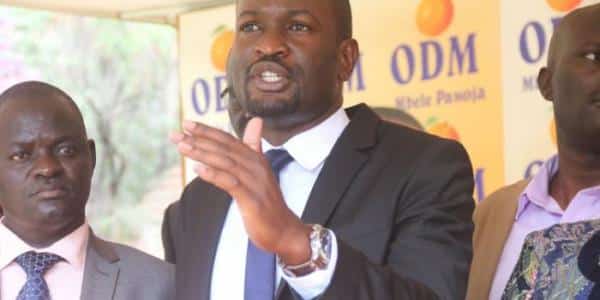 An undated video was shared online showing ODM secretary-general, Edwin Sifuna, ordering for two Jubilee leaders to be chased from Kibra during the November 7 by-election.

Sifuna who was addressing a rally in the constituency during the campaigns is heard instructing Dagoretti North MP Simba Arati and ‘his boys’ to deal with Kimilili MP Didmus Barasa and Boni Khalwale.

In what he termed as the ‘Didmus Challenge’ the Sifuna instructed that the Kimilili legislator be chased from Woodley to end of Kibra constituency in 1 minute and 59 seconds, a reference to Eliud Kipchoge’s IEOS 1:59 Challenge.

“On seventh, we want to chase these bedbugs that have infiltrated here to disturb us, are you ready. On top of the order given by Simba Arati, Simba and your boys I have an international tender for two people who claim that they are young and can run 100 meters in 1 minute and 59 seconds,” Sifuna stated.

He then went ahead to list Didmus and Khalwale as the targets to be chased from the area.

“That’s what I call the  Didmus Challenge, the other is Boni Khalwale who also needs to run. All they need are pacesetters. Are the pacesetters ready?”  he added.

The video has sparked controversy online especially after the two leaders were attacked in the constituency on September 7, election day.

The optics were worsened by the fact that Arati was filmed threatening to unleash goons on Barasa just before he was attacked by the rowdy youth.

Several photos of Khalwale went viral as he was seen arming himself with stones to defend himself against residents who were throwing rocks at him.

A section of Kenyans online claimed that the attacks on the two leaders seemed to have been premeditated.