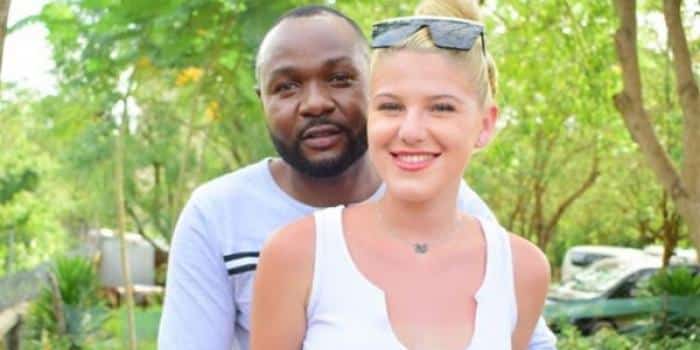 A KTN News reporter released a song to pour his heart out, revealing that he nearly committed suicide twice, following a nasty break up.

While getting engaged to his British lover, Madison, in Mombasa County, Tobias Chanji also recorded the video for his song, Why Pay Love with Hate, on the very same day he went down on one knee.

On Sunday, January 5, while at Diani Beach, Chanji spoke to The Standard and revealed that before meeting his fiancé, he had gone through a rough patch and felt that the best way to relieve the depression was through composing the song.

“I had a very nasty breakup last year (2019) that nearly pushed me to commit suicide twice,” Chanji stated adding that Madison swept him off his feet when the two met at an airport in Dubai, United Arab Emirates.

She had also gone through a tumultuous period in her life.

“Madison had not had it easy with her previous partner too. I was to shoot the video and she asked if she can tag along. I took advantage of the shoot and proposed. What a nice feeling.

“Madi is a very nice and beautiful lady. She worked as a flight attendant and just like me, was also healing from hurt,” Chanji stated.

In the song, Chanji advises Kenyans to refrain from hurting and being malicious to each other, because we are all human.

“Nikidhani mtima umepata yule wa kutulia naye, kumbe ndoto zake limbukeni (I thought that I had met someone whom my heart loved, but I didn’t know her dream was those of a novice) My late mother warned me, don’t change for a frontline.

“Kimya kimya nkalia, ukadhani ni machozi ya mamba, ukazidisha nkabaki najuta (I suffered silently and you thought I was pretending. You hurt me more and I ended up regretting). I was broken, bruised and angry. In this world we are all learners, so why pay love with hate,” he sings.