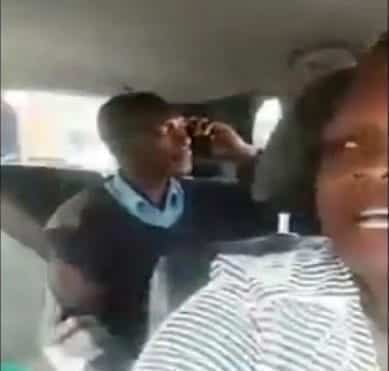 On Friday, a video of Mildred Owiso, an administrator of a popular Facebook page in Kenya, surfaced on the internet.

In the video, the woman recorded herself chasing a traffic cop from her car saying he had no right to be inside.

Bruh they even killed her dogs… Such cowards. I wish the corrupt leaders would be invaded the same way. 10 “policemen” for 1 woman? Impunity! pic.twitter.com/yubxCYAyur

“I will never give the police a ride in my car. If there is an issue, tell us which police station we are going to but the police have no right to ask someone to drive them in their car,” she ranted.

On Saturday morning, Owiso shared another video online and this time she claimed that officers had raided her home.

A seemingly worried Owiso alleges that the officers broke into her house and killed her dogs.

She can be heard asking the ‘officers’ why they are using excessive force and some point even claims that she is naked and needs time to dress up.

“Guys, I have an invasion in my house. The police have come in my house in the morning and as you can see there is teargas.

“I have almost 10 policemen in my house…they have come to arrest me…I don’t know why [SIC],” she said.

Online, netizens strongly condemned the incident asking relevant authorities to step in and protect the woman.

Mau: “No one has the right to forcefully break in in any kind of private property.”

Mike Kimngeno: “Why don’t these police officers summon the lady to the nearest station, issue arrest warrant in case of failure to enter an appearance..the brute force is inexcusable. Colonial.”

Samuel Magak: “Who has noticed how quick they have responded to “arrest her” but when they are needed in tricky situation they’re a no show? I’ll just go down on my knee’s n connect to our maker.”