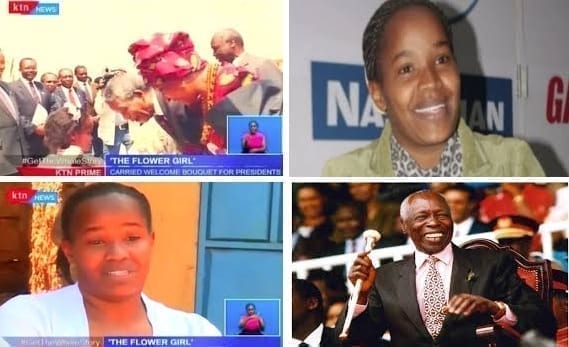 For those who were lucky enough to own television sets in the mid and late 90’s, you might have noticed a girl who was often clad in white dresses, stockings and a hat, holding a bouquet of flowers whenever the late President Daniel Arap Moi arrived from foreign trips.

I must admit that I wished we would swap places to enjoy the glamour and prestige that came with interacting with the former Head of State.

At the time, Susan Wangari resided at the Thomas Barnado House, a children’s home and she recently revealed that calls would be made to the home and she would be taken to the airport to receive Mzee Moi.

Now a mother of two, Wangari recounts those days with a smile on her face.

“I presented flowers to former President Moi in more than 10 occasions, I also received Margaret Thatcher and Nelson Mandela.

““Most of the other times, I gave the president flowers at JKIA as he flew in from foreign trips and he was friendly.

“He would carry me and we would walk together in the aisle,” she narrated.

She also shed light on the intense training she got from one Sister Lillian Njeri who honed her speaking skills and would tell her what to say when receiving Heads of State.

“After landing the onus, one Sister Lillian Ann Njeri took time to train me on a daily basis. The training involved walking towards her at her office holding a piece of newspaper, bowing and saying ‘welcome to Kenya’ before presenting the paper to her,” recalled Wangari.

She eulogized Mzee Moi as a great leader and a father-figure who loved unity.