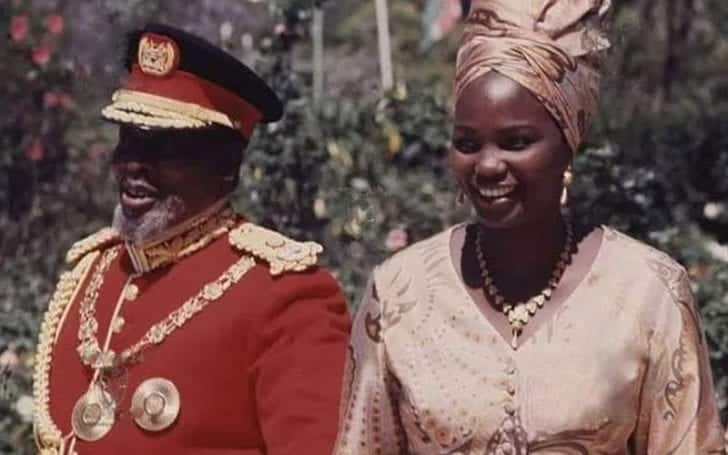 Born in Ngenda in Gatundu Kiambu County, she was raised by her parents Chief Muhoho wa Gathecha and Anne Nyokabi Muhoho. Ngina married the first president of the Republic of Kenya in 1957 when she was only 18 years old and together they had four children. She was his fourth wife.

Ngina stood by her husband during the turbulent times that preceded Kenya gaining her independence. She was once arrested and detained at Kamiti Maximum prison for her involvement with Jomo Kenyatta.

Despite her glamour and high fashion sense, her husband never allowed her to wear trousers, he preferred her to remain traditional and dress in a manner that suited her status as first lady.

Debate was immediate and fierce. Men gloated, saying Kamwaro’s ability to woo a pretty woman 47 years his junior was proof that the much-derided Kenyan man still has some bark after all. Women scoffed, saying the ‘innocent’ girl had made a mistake she would regret and that Kamwaro had merely used his wealth to seduce a girl young enough to be his granddaughter.

The late Kamwaro, in an interview with The Nairobian said his first wife died in 1996 and his second wife abandoned him when he was sick and suffering in hospital.

He went ahead and gave examples of men who have married much younger women: “Look at the famous farmer in Narok, Tumpes Ole Kilesi. He is over 70 years of age and has 12 wives. He married his latest wife early this year. She is not even 23 years like my Eunice!

“The paramount chief Ole Ntutu had 11 wives. My sister was wife number nine and she married him when she was barely 20 years old. Even King David in the Bible at his very old age was brought a young tender virgin girl. Maasais are like Israelites. However, like most other men, I cannot marry a woman from Nairobi.”

Atlanta Get Ready For A Mighty Visitation from THE LORD!