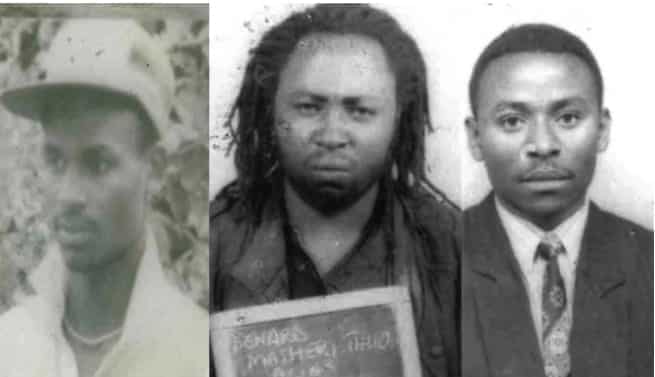 Kenya has had many criminals, like Dan Gachui, whose daring bank heists was the reason the Kenyatta government declared ‘robbery with violence’ a capital offence.

Gachui, who was wanted for 10 robberies, a murder and relieving cops of their machine guns, was gunned down by fearless reservist Patrick Shaw in Nairobi’s South C estate in 1977.

That was also the year Nicholas Mwea ‘Wakinyonga’ was gunned down by Shaw while celebrating at Nyakiambi Lodge & Night Club, the spot where Co-operative Bank now stands in Kangemi.

But if there ever were thugs who kept Kenyans talking, waiting while wailing (when they came calling), then it was the three musketeers – Anthony Ngugi Kanagi (Wacucu), Gerald Wambugu Munyeria (Wanugu) and Bernard Matheri Thuo (Rasta). They instilled fear in Kenyans between 1993 and1997. That was 18 years after ‘Wakinyonga’ was gunned down.

Their names were deceptive and misleading, such as Wacucu, which literally means ‘of the grandma’ and Wanugu, which directly translates to ‘of the monkey.’ And Rasta’s mean look was underscored by his dreadlocks.

Rasta, who got sick for lack of tobacco supplies, is said to have given his girlfriend an AK-47 rifle as a gift since flowers and chocolate were too common!

Shadrack Kiruki, the Police Commish at the time, put a Sh100,000 bounty on their collective heads for high profile murders, violent robberies and carjacking. A dramatic countrywide manhunt saw them escape cop dragnets after fierce shootouts. But they all met their waterloo under Daniel Seronei’s Alpha Romeo squad from the CID (now the Directorate of Criminal Investigations) after six months.

Wacucu, the ringleader was killed in Ongata Rongai where Wanugu escaped. He had a bullet proof vest. Wanugu was eventually gunned down at Kabata-ini in Nakuru (where he used his girlfriend as a human shield).

‘I killed Rasta, Wanugu and Wacucu, then my colleagues came…

It took a year for Alpha Romeo to track and gun down Rasta, who removed nails from his victims in his rural Kiria-ini, Murang’a County.

Rasta could, man solo, empty a whole magazine on cops who scampered for safety. He cared less for the GSU as well whom he countered with a grenade at the GSU headquarters after his henchmen were killed at the GSU Roundabout in 1996.

Rasta was said to bribe cops for info on how the Flying Squad was tracking him hence the 12 months of being on the run.

Other crooks later came into the picture. These included Simon Gitau ‘Saitoti,’ Edward Maina Shimoli, Godfrey Mulwa Kitheka, Daniel Cheruiyot and the notorious Simon Matheri Ikeere. But none can hold a candle to the ‘three musketeers.

Trump official coming to Kenya with plan to boost US investment