Senior Counsel Ahmednasir Abdullahi on Wednesday said it is high time President Uhuru Kenyatta told Kenyans what is happening between him and DP William Ruto.

Speaking on JKL, Ahmednasir added that the DP is under siege and the President’s actions have put him in a very difficult situation.

He argued that it would be better for the Head of State to openly state that he has differences with his deputy and perhaps Kenyans will understand why there has been friction between them recently.

“I think it’s high time the President told Kenyans what is going on between him and his Deputy. 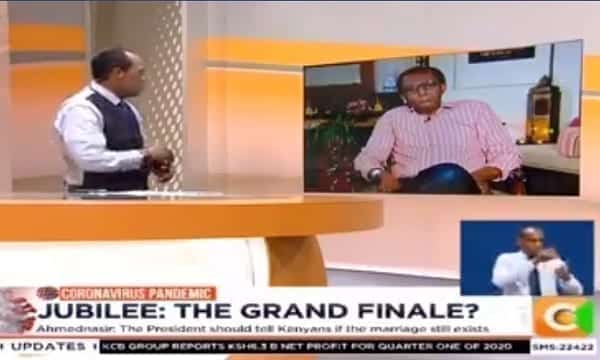 “…of course he (Ruto) is under siege… The President does not speak but a lot of his actions puts the Deputy President in a very difficult situation,” he said.

“Some of the things the President is doing with the opposition, with Raila, are completely against the constitution; it’s actually a complete breach of the constitution,” he said.

Adding: “I think it is hypocritical to say that Baba is coming to save Jubilee. Baba’s history is very clear; he never comes to save a party.”

On the possibility of a coalition, Ahmednasir said: “In a presidential system like Kenya’s, the president cannot share executive authority with members from another political party.”

He also spared some advice for DP Ruto saying provided he plays his cards right between now and the end of the year, he (Ruto) will remain relevant.

Corridors Of Power:Cord planning to launch its own weekly newspaper

Over 25 MPs defect to Jubilee during party convention