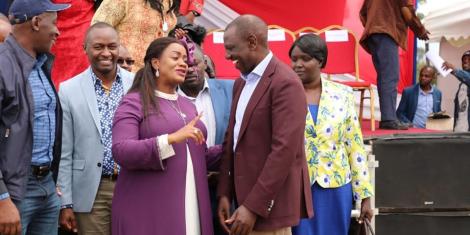 Waruguru argued that the DP was running a parallel government to undermine that of President Uhuru Kenyatta.

“We elected HE Uhuru, not Ruto. With ur Asili shenanigans you have just asked for impeachment and you’ll be served the impeachment hot,” she warned.

Laikipia Woman Representative Cate Waruguru and her Kirinyaga counterpart Wangui Ngirici during an Inua Mama tour in Naivasha and Nyandarua on October 11, 2019.

Further, Waruguru stated that the DP Ruto owed Jubilee supporters an apology for having a parallel party by the name Jubilee Asili.

Waruguru’s sentiments came around two weeks after she decamped from the DP’s Tanga Tanga brigade and joined the president and ODM leader Raila Odinga.

The duo talked about critical national issues including constitutional reforms and national unity.

“We engaged in a historic effort to leave no one behind. Glad to welcome the Hon. Cate Waruguru,” Suna East MP Junet Mohammed welcomed her.

In an interview on Inooro TV on Wednesday, June 17, Waruguru stated that the Tanga Tanga brigade had a strategy aimed at turning Mt Kenya leaders against the president.

“We would go round Mt Kenya complaining that Uhuru’s government is not doing anything and the DP would always be sitting there stumping his foot. At some point, I started asking myself, is the DP a poor messenger who never takes the message to his boss?” she questioned.

The lawmaker added that the trips in Mt Kenya were used to help Ruto campaign in the region.

“We have been busy going around doing harambees and going to churches. In some cases, what was promised is not delivered. When I accompanied Ruto to Laikipia he promised several buses to schools and we are still waiting for them.

“Other regions are busy doing development projects and I have decided that I will not take my people to the Opposition,” she stated.