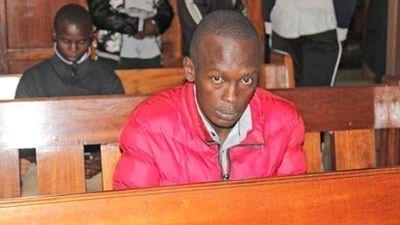 When in November last year, the National Police Service said it had received information from Interpol that some Kenyans were wanted in the US for alleged fraud offences, one of the names released was that of Edwin Sila Nyumu, a man who had been on the run.

Nyumu and his family were behind a US-based crime syndicate that laundered hundreds of millions of dollars in the country, but had managed to escape the FBI dragnet to hide in Mlolongo, Machakos.

In total, the family members are believed to have stolen more than Sh2 billion in a tax fraud, the Nation has established. It is one of the biggest cybercrime heists in the blossoming industry.

How this Kenyan family laid a scamming web and managed to bilk millions of dollars and send them to Kenya without raising the alarm has always petrified investigators.

For 12 years, since his name first featured on the Interpol list, Nyumu oiled the palms of all those who knew his identity and, the Nation was informed, he became a cash cow of police officers, until the money ran out last year.

Revealed: How Kenyan hacker flew into the trap of US…

But, by then, and after 12 years, he could no longer be charged with fraud since the federal crimes have a statute of limitations, which protects people from being harassed and having to constantly defend themselves from old charges.

Why police had not been able to trace Nyumu, and his millions of dollars, was never explained.

Mr Kamwaro, while seeking the order said the “matter is of public interest since it touches on fraud against another government.”

Although he added that Nyumu was supposed to be extradited to the US to face charges of fraud, it was already too late. After 12 years on the run, he was no longer wanted by the US.

Judge Greg Kays of District Court of Missouri reached the same verdict on September 22, 2017, according to papers obtained by the Nation.

It is now suspected that the police knew the 12 year limitation had passed and wanted to scare him.

But Nyumu was not an ordinary fraudster. He came from a family that had terrorised US institutions with tax fraud and invested in real estate projects in Kenya.

By running a multinational cyber fraud syndicate, this family had entered the annals of Kenya’s history for stealing the largest amount of money without being involved in tendering or even firing a single shot.

Additionally the family members not only launched Kenya’s journey into cybercrime, but also played a big role into transforming the country into a global hotspot of technology-based criminals.

When the FBI started a global hunt for scammers code-named Operation re-Wired, the Kenyans panicked and decided to flee. Some did not go far.

Robert Mutua Muli was arrested at an airport in Ohio, Texas, just as he was about to board a plane and escape back to Kenya on April 12 last year. His accomplice Amil Hassan Raage was arrested by FBI detectives in Nairobi three weeks later on May 5.

Muli’s relative, Jeffrey Sila Ndungi, was arrested at the Los Angeles International Airport as the plane he had boarded waited on the tarmac for clearance to fly to London, from where he would have connected to Nairobi. Between them they had stolen $3,154,118.83 (Sh315.4 million).

About a half of this money has never been recovered after it was transferred to bank accounts in Kenya and withdrawn.

And while little is known about Mr Raage, we now know that Muli and Ndungi are relatives with a common relation to Paul Kilungya Nyumu, the original kingpin.

In the world of cyber criminals, Paul Nyumu had at first introduced his nieces Lorreta Wavinya and Lilian Nzongi to cybercrime theft in 2006 — at a time it was not widely spread.

The scheme involved stealing the identity information of hundreds of victims, primarily residents of old people’s homes. These were used to seek more than Sh975 million in federal tax refunds.

Wavinya and her sister Nzongi had arrived in the US on student visas. She worked as a tax preparer and radiology technician in Kansas City. Because of her job, she was able to access patient’s identity information with ease.

Court records indicated that with family members, the sisters  generated various federal refund claims and also submitted false returns to tax authorities to generate claims in the range of up to Sh2 million per return. Cumulatively, it is suspected they stole Sh2.7 billion.

The family connections did not emerge until an obituary was placed in the newspapers on December 9 for a Ms Esther Mwelu Kairanga, where Nyumu was listed as the father of the dead. Nzongi and Wavinya were named as nieces.

Interestingly, Edwin Sila Nyumu — the man who disappeared for 12 years in Mlolongo — was listed as a nephew, while Monica Sila was listed as a sister of  Mwelu Kairanga.

We have now established that Monica, who currently lives in Kansas, US, is the mother of Jeffrey Sila Ndungi — the man who was arrested at the Los Angeles airport by the FBI.

Interestingly, the Nation learnt, Ndungi had been lured by the FBI to fly to America with a bait that a buyer for a fraudulent tax claim cheque worth Sh7.6 million awaited him.

He is currently serving seven years after being found guilty last year of aggravated identity theft and fraud. His distant uncle Robert Mutua Muli is serving three years for conspiring to defraud the American government of $2 million (Sh200 million).

Ndungi’s cousin Loretta Wavinya is currently serving a 14-year term in a prison in the US for wire fraud and aggravated identity theft since being sentenced in January 2009. She is expected to be released in 2023, and immediately deported to Kenya.

Her sister Lilian Nzongi was sentenced to five years and 10 months. She has never been heard of since being released and it is not known whether she in Kenya or the US as we could not trace her.  As for Wavinya, her commutation request was denied by retired US President Obama in 2017, meaning she has to serve her full term.

We recently drove to the sleepy Unoa Primary School in Wote town, Makueni County where Nzongi, Ndungi and Wavinya went to school.

We were told they were all clever students who topped their classes in the Kenya Certificate of Primary Education exams.

“Many years have passed, but everyone knows these kids because their father was a councillor here and they all did very well in KCPE,” Philip Musyoki, the head teacher at Unoa Primary School, told us.

“I haven’t heard about them for some years, but they went to America after secondary school with their mother, who was a teacher here.

“The father then relocated to Nairobi because their house used to get burgled,” he said.

It is now known, from their criminal case files,  that Nzongi and Wavinya went to the US around 2005. They joined their uncle Paul Nyumu, who had already been in the US for about 10 years, and their brother Edwin Sila Nyumu.

It’s believed that Paul Nyumu had begun a tax fraud scheme that involved the stealing of identities in Missouri two years before the arrival of his nieces Nzongi and Wavinya.

In the US, citizens file claims for excess tax paid using a form known as W2. The form is issued by employers, stating how much an employee was paid for the year. It is similar to the P9 form issued in Kenya by the Kenya Revenue Authority for filing annual returns. Scammers file fake tax returns using details of elderly or dead people and then applying for a refund.

They then cash the cheques and transfer the proceeds to third parties who withdraw the money.  Others sell the cheques.

“Some of the proceeds were then wired to, or withdrawn from ATMs in Nairobi, Kenya. The verified actual loss was over $2.3 million (Sh200 million) and the attempted loss was over $13.1 million (Sh1.3 billion),” say court records.

With so much money in his hands, Nyumu had to look for trusted people to help launder it to Kenya. Wavinya and Nzongi, his nieces who had arrived in the US using student visas, became the perfect candidates for the job.

He also recruited their brother Edwin Sila Nyumu and a woman known as Eva Mwangi, who was also from Kenya, but had moved to Kansas.

Nyumu, who was 38 at that time, was deputised by Mwangi in the syndicate.

Nzongi, who was shy of her 23rd birthday, Ms Wavinya (28) and Mr Sila (23) were recruited as runners who would help in withdrawing the stolen money from ATMs or moving it to bank accounts in Nairobi.

Mr Nyumu would transfer the stolen money to several accounts opened in the names of his two nieces or nephew.

“Discovery from the underlying case included two bank account applications listing Loretta Wavinya as a beneficiary payable upon death. One listed Wavinya as his niece,” say Nyumu’s criminal file records about his arrest on June 24, 2005.

After his arrest, Nyumu admitted to filing fraudulent tax returns and bail was set at $100,000 (Sh10 million) which he said he was unable to raise.

“He listed two children, aged 11 years and 18 months, saying, he had sole custody of the minors, and sole day-to-day responsibility for caring for them. He also said he was willing to surrender his passport,” the court papers state.

On the objection of his lawyers, his bond was reduced to $20,000 (Sh2 million) and he was ordered to surrender his passport pending the hearing of his case. He was also put on a house arrest programme to enable the government monitor his movements.

But the man failed to appear at the next hearing of his case on July 5, 2005 and escaped to Kenya.

He was never arrested again till his death and burial at Tutini Village, Emali Location, Makueni.

With the kingpin gone, Wavinya and Nzongi, together with their nephew Sila built an even bigger criminal syndicate that was only shut down last year.

But how these Kenyans managed to transact huge amounts of money in both Kenya and the Us remains intriguing.

“It is not that we don’t have good measures to fight cyber-crime. In fact we are one of the best at this in Africa,” says Charles Gichuki, the chief technology officer at OnNet Africa, which deals with eliminating cybercrime.

“Our biggest problem is corruption and a judiciary that is not able to deal with issues properly,” he says.

In Kenya, the vice is currently so entrenched that the FBI has a special unit to monitor cybercrime emanating from IP addresses in Kenya.