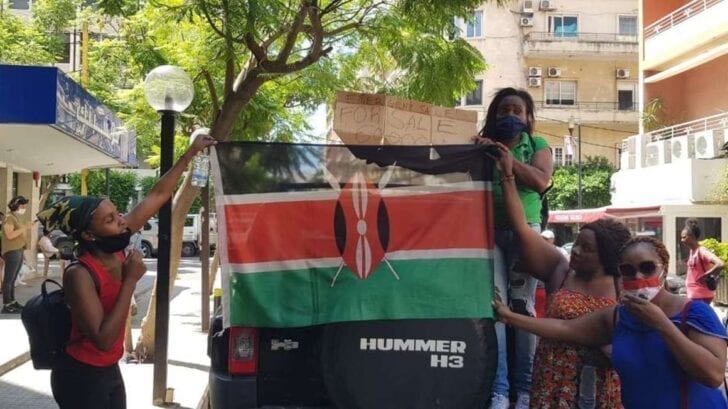 Domestic workers stranded in Lebanon continued to protest outside the Kenyan Consulate in Beirut on Monday, August 17, as they demanded repatriation.

Capping a week of relentless daily protests, chaotic scenes were witnessed as the fed up Kenyans began bombarding the Consulate building with all manner of items.

The Coat of Arms was pelted with stones as the protesters repeatedly chanted “We want to go home!”.

Kenya had announced that citizens stuck in Lebanon would be evacuated after the Beirut explosion of August 4. Citizens were asked to register with the Kenyan Embassy in Kuwait, accredited for Lebanon.

On Friday, August 14, however, the embassy announced that a delay of up to one week would be experienced in securing the necessary documents due to the implications of the blast. The military took over essential services, with a caretaker government in place after top officials resigned in the aftermath of the blast.

The plan posed a challenge for many Kenyans who arrived in Lebanon as undocumented immigrants to take up various jobs.

The Embassy in Kuwait further accused Kenyans of being chaotic and frustrating the process with relentless protests outside their consuate in Beirut.

The protests come at a time when Lebanese citizens continue with protests over grand corruption, demanding radical change in daily demonstrations in Beirut.

Top officials at the Ministry of Foreign Affairs were yet to respond to queries made by Kenyans.co.ke by the time of publication.

Principal Secretary Macharia Kamau had, however, dismissed reports that the government had abandoned Kenyans in Lebanon, maintaining that everything was being done to get them home.

“We have always been one of the first, if not the only African country, to evacuate. Every time there is a problem, if it is genuine, we always bring Kenyans home,”

“Consular services are there to help people deal with the law and order situation and documentation in case they run into difficulties,” he stated on Monday, August 17.

He was responding to a report from the International Relations Society of Kenya (IRSK), that lamented over what it described as the government’s inaction despite the contributions made by Kenyans in the diaspora to the economy.

“The Kenyan passport needs to mean something. The claims of lack of a budgetary capacity to secure Kenyans in times of crisis is tragic,”  stated IRSK secretary Peter Mwencha.

Watch a video of the protests below:

10 artistes making a quiet return after failed stints in Diaspora