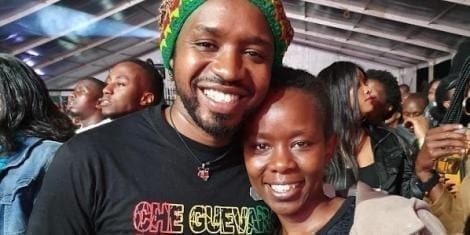 Renowned Kenyan activist Boniface Mwangi was the toast of the town during this year’s Encounters South African International Documentary Festival held on August 31.

The Kenyan movie Softie, which was based on his life, won the Best African Documentary Film Award.

Speaking to Kenyans.co.ke, Mwangi revealed that the movie is set to hit Kenyan screens around October 2020, as long as the scheduled reopening of theatres is maintained

Taking the lead role in the mini-documentary, the vocal activist gave an in-depth look into his life.

The film documents his audacious 2017 bid to run for the Starehe Constituency legislative office, as an independent candidate.

His wife Njeri Mwangi received rave reviews and she was able to capture the turbulent life behind one of Kenya’s most outspoken activists.

In one particular scene Boniface and his wife Njeri Mwangi are talking about personal priorities.

“I have given my eldest, my youngest, and my middle one, my life. So maybe now you give your children your life. Then, after that, you can give the country what is left. Instead of giving your children what is left,” Njeri remarked in a sombre tone.

The intimate moments between the couple and their children deepens the viewers’ understanding of the aspiring elected official, offering a rare glimpse of the campaign’s turbulent pace.

Mwangi’s run for office under his Ukweli Party in 2017, was unsuccessful as he lost to musician-turned-politician Charles ‘Jaguar’ Kanyi.

The 96 minutes film was directed by Sam Soko and produced by Soko and Toni Kamau.

“It’s been a 7-year journey and we can’t wait to share this film with more people in Africa. We are proud to be part of the group of African filmmakers who are pushing to give a voice to our stories,” Sam Soko stated after the win.

This is the second major win for the real-life film after it won during the 2020 Sundance Film Festival which took place from January 23 to February 2, 2020.

Since 1985, hundreds of films that have launched at the festival have gained critical recognition and acclaim, reaching new audiences worldwide.