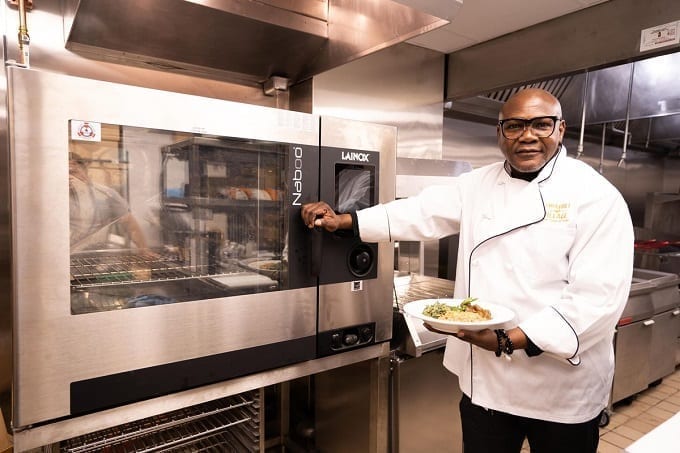 Restaurateur Kevin Onyona nicknamed his downtown Kenyan restaurant “The Consulate.” He envisioned Swahili Village as a cultural and culinary hub for African diplomats and expats, the nearby World Bank/IMF crowds, and other internationally minded office workers.  It would be one of the only upscale African restaurants in the District—and one of the only Black-owned fine-dining establishments, too. Then only 10 days after it opened, it was forced to shutdown because of the coronavirus pandemic.

Swahili Village reopened its dining room again at the start of phase two in June, though not exactly the way Onyona had hoped. The downtown happy hour and lunch crowds were gone, and many neighboring businesses were still closed or boarded up amid racial justice protests. Onyona and his wife/general manager Lynn Onyona had invested $1.3 million in the restaurant (formerly Honeysuckle and Vidalia), but a lot of people aren’t comfortable venturing into a subterranean dining room with no outdoor space. Today, Swahili Village is doing 10 percent of its projected sales.

“Unless we get that really strong indoor dining, we were not built for just takeout. That restaurant is a fine-dining space where people come to enjoy the experience, the food, the music, the culture,” Onyona says. “If this continues for another three or four months, I don’t think we’ll make it.”

The restaurant had been a long time coming for Onyona. He had never run a commercial kitchen when he opened the first location of Swahili Village in a small trailer-like space in College Park in 2009. The former seminary student immigrated to the US from Kenya in the late 1990s and previously worked as a sales executive for Home Depot. But he loved to cook, and he wasn’t impressed with the African restaurants he found in the US. “I thought I’m going to open my own and stop complaining,” he says. With the help of chef Sammy Davis (now of Milk & Honey), Swahili Village was born.

The business took off and the restaurant upgraded to a bigger space in Beltsville in 2016, which attracted crowds from all over the region for its goat stews and deep-fried whole tilapia in coconut sauce (a staple of Lake Victoria where Onyona grew up). “Our food, believe it or not, touches almost all continents. Anybody who comes to our restaurants will find something familiar, except we make it the Kenyan way,” says Onyona, noting the influence of Indian, Western, and Arab traders on the cuisine.

Then in May 2018, the restaurant suffered significant damage from a kitchen fire. It took nearly a year to finally return. The Kenyan ambassador to the US led a reopening ceremony.

Expanding to downtown DC was another obstacle to overcome, especially when it came to fighting against preconceived notions of African cuisines. “Many times, I put my concept to landlords and they didn’t even look at it twice. They’d just say no,” Onyona says. “Many, many landlords, particularly if you’re fine-dining, they will look at that concept and say, ‘forget you.’ It was a big uphill battle.”

With a space finally secured, the Onyonas made a point to staff up with a diverse team: “Most fine-dining restaurants are not intentional in hiring people of color. We are actually 100 percent people of color from management all the way down to bartenders, everybody.”

Unfortunately, the Onyonas had to let their 65 employees go at the start of the pandemic. The restaurant was too new to qualify for a lot of federal aid, such as the Paycheck Protection Program. Today, the restaurant has six employees.

Swahili Village is trying to do what it can to survive. The restaurant launched all-you-can-eat brunch with bottomless mimosas two weeks ago, and has applied for permits for an outdoor parklet out front. The Beltsville location is doing slightly better, because it was able to qualify for a PPP loan and already had a strong following. Meanwhile, a Newark, New Jersey restaurant, with strong backing from the landlord and developer, is still projected for next summer. But the DC outpost hasn’t had a chance to build its reputation.

“I didn’t even get a chance to get introduced to the District. I was so looking forward to that,”  Onyona says. “It’s something very different, eclectic, but culturally beautiful.”

Confessions from Kamiti: Why I killed my wife as my kids watched

BE AWARE: IMMIGRATION SCAM ON THE RISE

Kenya to hold Olympic distance trials in US

VIDEO:Uhuru and Ruto’s Busy Schedule At The Coast

#PoleKwaMwirigi:Mwirigi speaks on his relationship with Sharon Mundia