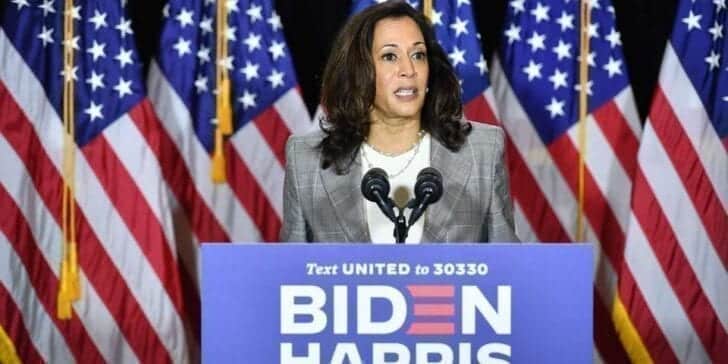 Kenyan professor David Monda in an interview with TIM.TV, the Voice Of Immigrants in the US discusses the Big question of Kamala Harris VP Pick,how she will help or hurt Joe Biden.

The discussion is about how does the first black, Asian American, woman and person of color chosen as VP candidate change the status quo for traditional America?

The Show is about the impact of the first black and Asian American, woman and person of color to be chosen as VP candidate, Sen Kamala Harris.

VIDEO BY TIM.TV, Voice Of Immigrants

The process of analyzing and understanding presidential election dynamics often leads us to look at the American electorate not as a whole, but by segments. Party identification is the most frequently used way to sort voters, but other variables are also meaningfully related to political behavior and help explain how and why people vote.

Of particular interest this election cycle is the religious identity of voters, a factor that appears, at least to me, more important than it has been in recent presidential elections. This is in part because Joe Biden is only the fourth major-party Catholic presidential nominee in U.S. history and in part because Donald Trump continues to make the courting of evangelical voters a major priority of his campaign. Both the Biden and Trump campaigns have appointed coordinators to reach out to faith communities.

With all of this in mind, in what follows I will delineate the most politically meaningful religious segments in the U.S. today and briefly review what we know about their probable voting behavior in the presidential election.

Protestants are the largest religious group in America, representing about 46% of American adults, although that’s significantly smaller than in previous decades. (Protestants have been replaced mainly by the growing group of Americans who say they have no religion, the “Nones,” to which I will return below.)

Given the nesting issue described above, Protestants are much too large and variegated to analyze meaningfully for political purposes as a single group, so I find it useful to divide them into four segments: White Evangelical Protestants, White Mainline Protestants, Black Protestants and Hispanic Protestants.

The size of the White Evangelical Protestants segment in the U.S. varies depending on how evangelicals are defined (different researchers and organizations do it different ways), but I think the range of 15% to 16% is a good estimate. In Gallup’s 2020 data, 15% of Americans are White, Protestant and attend church very frequently (my working definition of evangelical). A 2019 Pew Research report estimated White evangelicals were 16% of the U.S. adult population. (The exit polls in 2016 reported that 26% of all voters met their definition of being White Christians and self-identified as evangelical or born again, but that group included Catholics, Mormons and others, not just Protestants.)

White Mainline Protestants are also defined differently by different researchers, but essentially they are White Protestants who identify with Protestant denominations not usually classified as evangelical — including Episcopalians, Presbyterians, Lutherans and others. In lieu of Protestant denomination data, grouping together White Protestants who are less religious can serve as an effective surrogate for the Mainline category. Either way, this group constitutes about 12% to 18% of the population, and skews toward Trump. Gallup estimates that Trump approval among White non-evangelical Protestants is about 60%, and Pew estimates that 61% of their defined group of White Mainline Protestants would vote for Trump.

Despite Trump’s promise four years ago that 95% of Black voters would support his candidacy by 2020, we see no signs so far that Biden won’t get the same huge majority of the vote Black Americans have given to Democratic candidates in previous elections. Kamala Harris, the new Democratic vice presidential nominee, identifies as Baptist, and it is possible that her religious connection with Black Protestants could be an added dimension to her impact on Black voters’ turnout in November.

About 24% of Hispanic Americans are Protestants, which translates into about 4% of the U.S. adult population based on Gallup 2020 estimates. Hispanic Protestants appear to be a swing group of voters, with roughly an even split in their current views of Trump.

Americans who identify as Latter Day Saints or Mormons constitute about 1% to 2% of the population and are generally strongly Republican in political orientation. Although traditionally Republican, Mormons are not nearly as strong in their support for Trump as evangelical Christians are. Mormons give Trump a 60% approval rating in Gallup data so far this year, and several post-election surveys after the 2016 election suggested that Trump received about 60% of the Mormon vote. However, that was a lower proportion of the Mormon vote for GOP candidates in previous elections (including, of course, the Republican candidate in 2012, Mitt Romney, who himself is Mormon).

Catholics Too Varied to Consider as Monolithic Political Target

The second-largest religious group in the U.S. are Catholics, at about 22% of the overall U.S. adult population and about 23% of the vote in the 2016 presidential election. As I discussed in some detail recently, this group is particularly relevant this year because of Biden’s Catholic faith. (The only other Catholic major-party presidential nominees in U.S. history have been Al Smith in 1928, John F. Kennedy in 1960 and John Kerry in 2004.)

Active White Catholics are disproportionately pro-Trump, with Gallup data showing about 62% Trump job approval. This pro-Trump skew most likely reflects the general tendency for highly religious Americans to identify as Republicans, and also may reflect active Catholics’ more anti-abortion attitudes, in line with Trump’s abortion positioning. Biden’s own pro-abortion position may hurt him among this segment.

Lapsed White Catholics — those who identify as Catholics but who are not active — give Trump job approval ratings slightly above the 50% level, higher than the national average but below Trump ratings among Active White Catholics. This suggests that Biden may have more opportunity to reach out to less active Catholics, particularly because they tend to be less likely to oppose abortion and less likely to say abortion is going to be important in their vote.

Hispanic Catholics‘ position on Trump is more negative than positive; they give Trump a 61% disapproval rating so far this year, suggesting they could be a key target for Biden, particularly in specific swing states.

Nones — Americans with no formal religious identity — now constitute at least a fifth of the U.S. adult population, based on Gallup data and other estimates. Nones skew younger than the overall population, and are not only less interested in religion but (as is the case for young people in general) also are apparently less interested in voting. The 2016 presidential election exit polls suggested that 15% of all voters were Nones, lower than their population percentage at that time.

When Nones do vote, they skew heavily Democratic. The 2016 exit polls showed that 67% of those with no religious identity voted for Clinton over Trump. Pew’s latest estimate is that 72% of the religiously unaffiliated say they would vote for Biden, and Trump disapproval among Nones in Gallup’s data so far this year is 69%, supporting the idea that Biden should get the significant majority of the vote of this group, if they turn out.

Americans who identify their religion as Jewish represent about 2% of the U.S. adult population. Roughly seven in 10 Jews voted for Clinton over Trump in 2016. Current disapproval of Trump among Jewish Americans in Gallup’s data is roughly 70% (based on the relatively small number of Jews interviewed so far by Gallup in 2020), indicating no sign of a major shift in the Democratic skew of the Jewish vote.

About 2% to 4% of Americans, including Muslims, Hindus, Buddhists and others, identify with non-Christian faiths other than Judaism. These individuals as a group give Trump low approval ratings, suggesting strength for Biden. Although Harris identifies as Baptist, her mother was a practicing Hindu, raising the possibility that Harris’ nomination may increase interest in the Democratic ticket among Hindus this year.

White Americans who identify as evangelical Protestants or Mormons, or who are active Catholics or lapsed Catholics, or who associate with other Christian denominations, are significantly predisposed to vote for Trump in this election, with White evangelicals standing out as Trump’s most loyal faith group. A key question will be Biden’s ability to leverage his Catholicism to reach out to less active Catholics, along with the possibility that his faith could be effective in reaching less active White Protestants. Trump also has a current edge among White Mainline Protestants, although they certainly will be more susceptible to Biden’s campaigning than other more evangelical White Protestants.

Four religious segments appear to be strongly in Biden’s camp: Black Protestants, Nones, those who identify with non-Christian faiths, and Hispanic Catholics. Biden’s main challenge with these groups is to increase their turnout, particularly with youthful Nones who are less engaged in both religion and politics. Biden’s choice of Harris as his vice presidential nominee may help increase turnout among Black Protestants.

The relatively small group of Hispanic Protestants constitutes the one religious segment that appears to be truly up for grabs in this election, with just about as many at this point saying they approve of Trump as saying they disapprove.