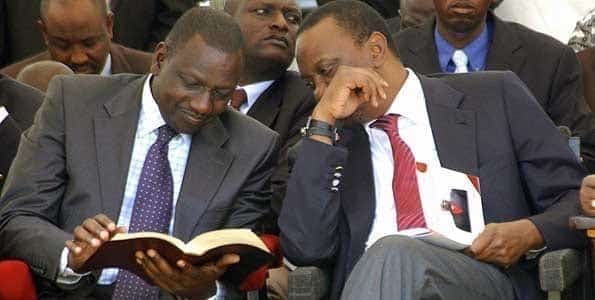 Foreign diplomats are pressuring President Uhuru Kenyatta and his deputy William Ruto to tone down their differences even as allies of the two leaders vow to oppose any political deal between them.

The envoys, backed by the United Nations, have prevailed upon the two leaders to cool down political temperatures in the country ahead of 2022 elections, in a move that could also unlock infrastructure investments worth billions of shillings.

The clergy have now taken up the task of getting the duo to talk though the peacemakers remain tight-lipped on the progress.

Wednesday, Bishop David Oginde of Citam refused to confirm or deny the ‘Handshake II’ efforts, only saying that time was not ripe to speak about it.

“It is not yet time for discussion on the same. I know the media would like to hear something . . . but no. Why don’t you call me later?” Bishop Oginde told the Nation, giving an indication of progress in the near future.

Sources not authorised to talk to the press on the matter told the Nation that the tension between Mr Ruto and President Kenyatta also featured on the side-lines of a meeting in France where the Kenyan delegation was negotiating deals between the two governments.

Among the agreements reached is a public private partnership (PPP) for the construction of the Nairobi-Nakuru-Mau Summit highway signed between KeNHA and Vinci Concessions, commuter railway line from Nairobi CBD to Jomo Kenyatta International Airport (JKIA) and the 400kV Menengai-Rongai electricity transmission line.

Dr Ruto has also been meeting diplomats in the last few weeks.

On September 24 shortly before 4pm, his helicopter touched down at Muthaiga Golf Club and he was driven to the official residence of Simon Mordue, the European Union Ambassador to Kenya.

On hand were ambassadors from 19 European countries. They even took a selfie together. That was the fourth meeting the DP was having with the Europeans.

A Kenyan official rubbished the efforts and accused the DP of trying to curry favour with the West.

“He represents no country and needs to find political significance. He may have been approached by busybodies from the outside or he has been approaching them,” said the official, adding: “There’s no pressure. I think it’s coming from our country, our people not from outside. This is politics. It is normal. The people always try to find ways to reconcile those who think have been separated.”

But the fresh plans to unite the president and his deputy are already facing a rebellion from their lieutenants, proving a hard nut to crack by the clerics who are determined to restore the lost camaraderie of the Jubilee duo.

The clergy behind plans to reconcile the two, who have had frosty relationship since the president reached a truce with his erstwhile rival, ODM leader Raila Odinga on March 9, 2018, argue that their differences were not healthy for the country.

But their foot soldiers hold that they only recognise the first deal sealed more than two years ago — and which has caused a storm in Kenya’s politics, making the DP an outsider, and Mr Odinga a respected insider.

Wednesday, Belgut MP Nelson Koech, a close ally of the DP, termed the discussion of a possible handshake between Dr Ruto and President Kenyatta as a ploy he said the Tangatanga group will not entertain.

While those on the Uhuru side paint the reports of a Uhuru-Ruto handshake as coming from the Ruto side, those in the DP’s wing dismiss this.

“It is laughable to attempt to paint us as desperate for a handshake because we do not believe in its value in the first place,” the Belgut MP said.

Jubilee vice chairman David Murathe said there was no planned deal between the President and Dr Ruto. “In fact, we have said that they be allowed to continue criss-crossing the country as stopping them is just making them look important for no reason,” Mr Murathe told Nation.

The prayer breakfast held in May 2018 saw the President, Mr Odinga, Dr Ruto and Mr Musyoka apologise to one another following the highly charged 2017 presidential election campaigns.

The efforts by the religious leaders are said to be led by Archbishop Anthony Muheria of the Nyeri Archdiocese, retired Africa Inland Church (AIC) Bishop Silas Yego and Bishop Oginde.

The efforts are said to have been born after a September 29 meeting with President Kenyatta at State House, Nairobi, where the Head of State urged them to be the voice of reason “and persons who help heal divides.”

“Speak boldly against all the vices that are holding our nation back. Our job of building this nation is a shared responsibility; we are serving the same people. We deliver on the physical wellness of all the citizens as you nourish their souls and spirit,” the Head of State told the religious leaders.

In the meeting, President Kenyatta repeated his call for a stop to early campaigns, often an accusation against Dr Ruto, saying: “We cannot be a nation whose sole obsession is politics – all year, every year, year in, year out.”