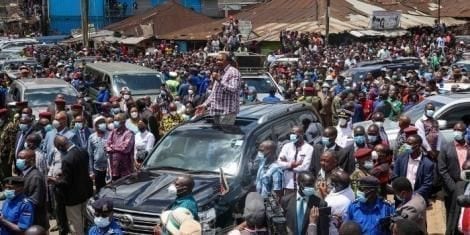 President Uhuru Kenyatta made a stopover at Pumwani after unvelling a Boda Boda Investment Scheme at the area’s Social Hall on Friday, October 23.

While addressing residents who turned out in large numbers to receive him, the president asked them to accord support to the Nairobi Metropolitan Services boss Badi Mohammed.

In addition, the Head of State praised Badi, saying that his work was commendable, and that the development of the city would benefit all Nairobians.

“No one’s job has been snatched. We should work together to develop Nairobi. Let us all support Badi and help him do his work” Uhuru stated.

“Sonko, Sonko, Sonko,” the residents chanted forcing the president to say that he was willing to work with leaders across the divide.

“I do not know if it is possible but I promise to try,” the president vowed.

The president also took time to drum up support for the Building Bridges Initiative, asking the residents to take time to read the report.

Since key functions were transferred to Badi early this year, the latter and the Nairobi Governor have clashed on several occasions. The two leaders share the same blueprint and have implemented a number of projects.

NMS launched an infrastructural project aimed at rehabilitating roads. Roads in the city were recarpeted and pedestrian walkways and cycle lanes were constructed.

Badi also unveiled several projects he had completed within 100 days, listing supply of water as a key factor. It sunk 93 boreholes across all informal settlements across the city and purchase of an additional 20 water bowsers to enhance water distribution, recovered contested public land earmarked for waste management, increased the collection of garbage from 1000 tons a day to 3000 tons and completion of 1.2 Km Grogan road.

Sonko has publicly expressed his dissatisfaction with the Nairobi Metropolitan Services Director-General.

On October 15, Sonko declined to sign a Ksh37.5 Billion Nairobi City County Appropriation Bill, 2020 that allocated the Nairobi Metropolitan Service Ksh27.1 billion.
He referred the bill back to the assembly for consideration as he claimed that details of the budget had been swapped at the last minute.

“I have outlined in detail illegalities and inconsistencies contained in the budget that was presented by cartels from State House, Harambee House and the Nairobi Metropolitan Services at the last minute, swapping it with the original Budget Proposals earlier submitted by the County Executive,” read the statement.

Sonko accused NMS of perpetuating impunity and undermining his leadership.

“I find it strange and ridiculous that they have been throwing around funny figures to entertain the public while creating the impression that I have “refused” to fund the NMS.

“The NMS is fully aware of the fact that there is no law in Kenya that allows a County Government to finance the operations of the Office of the President where they are domiciled,” he argued.