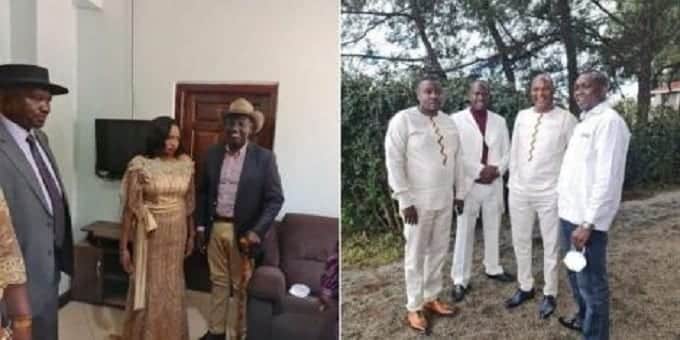 The ceremony, which is currently ongoing at the Kihika family ranch in Marmanet (Nyahururu), was graced by Deputy President William Ruto.

Sources privy to the ceremony indicated that the DP witnessed dowry negotiations that took place before the final wedding ceremony.

Kihika and Mburu have had a much-publicised relationship over the past eight years when they met on the campaign trail.

Mburu, a close associate of Ruto, was campaigning for the Jubilee campaign team when he met Kihika who was seeking the Nakuru Senatorial seat. She had recently returned to Kenya from a 20-year hiatus in the USA.

Although she lost the seat, the friendship between Kihika and Mburu grew and soon after the general elections, the two became inseparable, leading to the highly-publicised divorce between Mburu and his first wife Beatrice Wanjiku.

Wanjiku claimed Mburu’s property, saying that she had met him while he was still trying to find his way in life.

“During the month of November 2002, when you were working as a delivery boy for One Touch Cargo Limited, and our client was a secretary to the managing director at the National Water Conservation Corporation, you contracted marriage under the Agikuyu customary law,” reads the affidavit signed and presented by Wanjiku.

The soft-spoken businessman’s roots can be traced to Solai in Nakuru County, where his parents operated a charcoal burning business.

On the other hand, Kihika comes from the wealthy family of the late politician Kihika Kimani.

Kimani, who had eight wives and fourteen children spread across various parts of the Rift Valley, holds the record as the only MP to serve three separate constituencies.