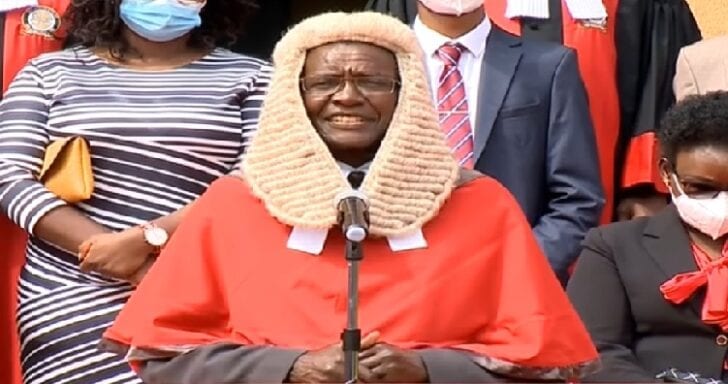 Chief Justice David Maraga will officially retire on Monday at midnight as he attains the retirement age of 70 years.

“This honourable be pleased to order that his lordship Honorable Mr Justice David Kenani Maraga shall as having retired from the office of judge, Chief Justice and president of the Supreme Court of Kenya at midnight on January 11, 2021,” Havi said.

As the ceremony moved out of the Supreme Court chambers in Nairobi, the CJ, with a radiant smile possibly signifying the end of a successful 18-year career in the Judiciary, started with thanksgiving first to God, his wife and his family for all the support.

“The time I served, my dear wife, my children and my friends, you bore the brunt of the attacks and threats against me and I sincerely thank you and do not take that for granted,” said the outgoing Chief Justice.

The CJ also thanked Kenyans for the “unwavering confidence and support” they gave him in what he called moments of “great adversity and perils”.

After appreciating the support he got from his colleagues especially his deputy, CJ Maraga challenged the members of the Judiciary reminding them of their critical role as custodians of the constitution and protectors of the rule of law.
“I want to urge you, do not let Kenyans down.”

Having served under a tenure that saw him annul a presidential election in 2017 that put him on the wrong side with the ruling regime, Maraga has fought numerous battles many which have not given him victory.

In 2020, CJ Maraga’s advisory to President Uhuru Kenyatta calling for Parliament’s dissolution for their failure to implement the two-thirds gender rule fell on deaf ears. The CJ has also found it an uphill task in getting the president to swear in 41 judges appointed by the Judicial Service Commission since July 2019.

Chief Justice David Maraga hands over the The Constitution to acting CJ Philomena Mwilu (left) during his retirement ceremony at the Supreme Court yesterday.

In his final statements, the CJ asked the members of the judiciary to be very bold and brave at a time the country has started witnessing increasing political tensions.

“My colleagues if you waver and do the wrong thing and this country descends in to chaos, God will never forgive you. Stand firm and do the right things. God and the people of Kenya will defend you,” said the CJ.
When the incoming acting CJ took to the microphone, her reflections about CJ Maraga were those of a man only comparable to a justice guru.

“My lord you have undertaken the honourable responsibility with outstanding dedication and faced all the numerous and considerable challenges facing our institution over the past four years with grace, judiciousness and resolute determination,” said Mwilu.