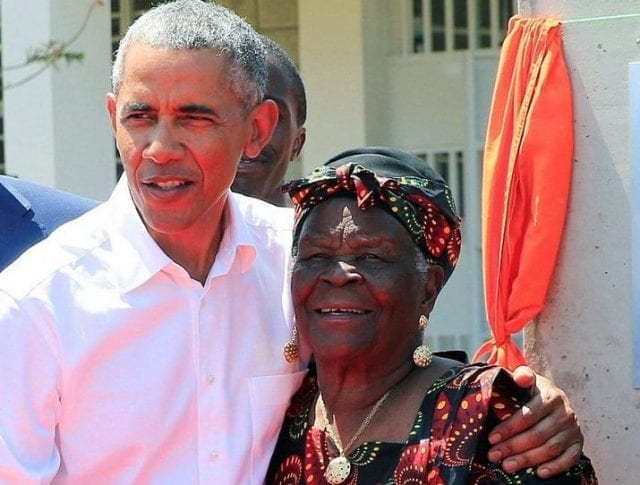 On learning of the death, President Uhuru Kenyatta condoled the Obama family, saying

Mama was as an icon of family values and a philanthropist whose contribution to the progress of the Kenyan nation will be dearly missed.

“The passing away of Mama Sarah is a big blow to our nation. We’ve lost a strong, virtuous woman, a matriarch who held together the Obama family and was an icon of family values,” the President said.

He said Mama Sarah Obama will be remembered by many for her philanthropic work, especially in her Nyang’oma-Kogelo home in Siaya County where she initiated several community development projects.

“She was a loving and celebrated philanthropist who graciously shared the little she had with the less fortunate in her community,” he said, wishing the Obama family God’s grace as they mourn their departed matriarch.

Her demise was confirmed by her daughter, Marsat Obama, who told the Nation that her mother died at the Jaramogi Oginga Odinga Teaching and Referral Hospital, Kisumu at 4.45am on Monday morning. She had been admitted to the hospital on Sunday morning.

She said her mother had been ailing for some time now and had suffered a stroke in September last year.

“She was diagnosed with stroke in September last year and had blood sugar related problems,” she told the Nation by phone.

The family is making arrangements to have her buried today (Monday) at the Muslim Cemetery in Kisumu.

“We are trying to see whether we shall be able to bury her today and if not, we shall bury her tomorrow,” a relative said.

Contacted, Mr Malik Obama, the former US president’s Kenyan half-brother, told the Nation that he would comment on the matter later.

“I have no comment for now, I’ve just woken up,” he said by phone on Monday morning.

Following the news of Mama Sarah Obama’s death, Kisumu Governor Anyang Nyong’o sent his condolences to the family and the Kogelo community in Siaya County, where she fails from, saying she will be greatly missed.

“She was always very charming and warm to those who visited her at home in Kogelo,” Prof Nyong’o said.

According to Prof Nyong’o, the late Mama Sarah Obama was his late mother’s great friend “and a dear grandmother to all of us”.

“Mama Sarah Obama was not only a matriarch of the larger Obama family but a mother figure to many people. She was a philanthropist who helped to mobilise funds to pay school fees to many orphans and vulnerable children. She also supported many widows. May her soul rest in peace,” said the Kisumu governor.

In his message of condolences, ODM Leader Raila Odinga said Mama Obama used her grandson Barack Obama’s rise to US presidency to promote the education of girls and fighting social ills through her foundation.

“In the passing of Mama Sarah Obama, we have lost a matriarch who lived ahead of her time. She single-handedly kept the family going long after [her] husband departed,” said Mr Odinga.

“In between, she became a symbol of the resilience and confidence of the African woman with a unique capacity to face the challenges of life,” he added.