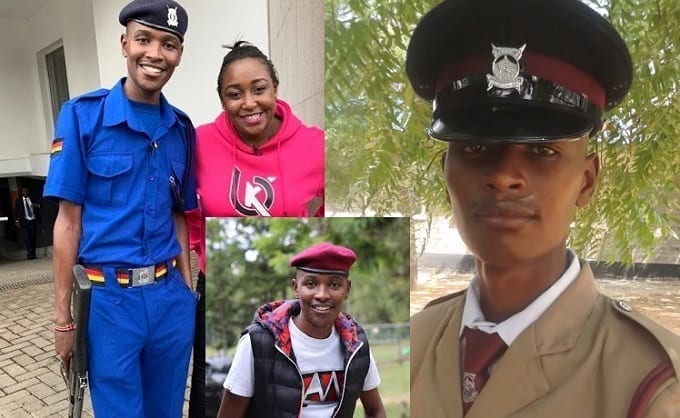 Samidoh, who was born Samuel Muchoki is a Kenyan Kikuyu musician well-known for his hit song “Ndiri mutwe mwega” Samidoh is also a serving police officer after joining the services in 2013, and graduating in 2014. He is likewise acknowledged for being involved with acts such as Joyce Wa Mama.

Samidoh was born in the late ’80s or early ’90s. His exact age is still under review and will be updated soon.

Samidoh was brought up by a humble family in Subukia, while stile young his father died and soon after his mother and five brothers were kicked from their Subukia home by their father’s brothers which led them to settle in Nyandarua County
Shortly after he joined form one Sam lost his mother and his life was really affected by his as he sings in his song ‘Niwathire Naihenya’.

Kenyan Man Advises Karen Nyamu To Forget her Past Pains with…

After finishing form four Samidoh left his village and came to Nairobi, where he joined his elder brother who was a drummer for Kamande Wa Kioi’s band, he then settled in as a backup singer for Kamande wa Kioi. After the gig was over and things were not working out Samidoh decided to study but still performed occasionally.

Later Samidoh joined the Kenya Administration Police, and got posted in Daadab from where he launched his music career with his single “Ndire Mutwe”

Samidoh has also ventured into gospel with his latest release ‘Murata Wa Ngai’ which has over 850k views on YouTube.

Samidoh is married to Edith Muchoki, he married his first love who he first sang about, and together they have two kids.

Samidoh apologises to wife after admitting to impregnating Karen Nyamu

Samidoh does various live performances for a good amount, he also gets an estimated KSH 100,000 per month from his youtube channel which has over 100k subscribers.

He has earned himself a good amount throughout his music career but this information is still under review and will be soon updated.

Samidoh came together with Benga star Joyce Wa Mama to work on the mega-hit Wendo Wi Cama this song was released in May 2019 and was trending at number 1 on YouTube for about a week, so far it has over 2 million views on the video-sharing platform. The two have also gone on shows together to perform their song ‘Wendo Wi Cama’

Samidoh is an Administration Police (AP), He joined the services in 2013 and graduated after 15 months in 2014, when he was posted in Eastleigh, then in Mpeketoni for about three months and later to Daadab where he stayed for about 6 years. Samidoh is still an officer and is not planning on quitting any time soon.

Samidoh concedes that despite the fact that he has not been in Kikuyu music sufficiently long to warrant him the sort of excellent achievement that he prides in today, it hasn’t been that easy for him and there have been many ups and downs for him throughout his career

“I can reveal to you that most people just came to catch wind of me in 2016 in the wake of discharging my first collection ‘Ndiri Mutwe Mwega’ (I am Mad). In any case, I have actually been in and out this industry since 2009 in the wake of finishing secondary school the earlier year,” He disclosed to Inooro FM’s Jeff Kuria in an ongoing meeting.

Samuel Muchoki a vocation Administration Police official as of now situated in Athi River, adds that his adventure to music fame was not ‘sudden’ as it included ups and downs.

Some of the things that have helped sam with his journey to where he is now include;

The ‘Murata Wa Ngai’ (Friend of God) singer, says that when composing the songs, he likes to focus on themes that he knows are popular with his target audience and will reflet well with what is happening in the society.

“This kind of focus blended with some artistic creativity often doesn’t end badly for the artist. For instance, themes like love are things that will never fail to arouse interest among human beings,” he notes.

When you allow yourself to get drunk with fame and money, Samuel warns, your downfall becomes a matter of when and not if.

As such, Muchoki who has vowed to continue working as a policeman for the next foreseeable future, he is relactant and id not willing to quit anytime soon, says humility before God and people will bring you unmeasured success.

With all his three consecutive albums being really successful, the Subukia-born artiste says that these are fruits of patience more than anything else.

Samidoh Is a Serving police officer of the republic of Kenya and a Kikiuyu Muisician.

How old is Sam?

He is still young and fresh in his career.

How tall is Sam?

He is of average height.

Sam is married to Edith Muchoki.

A Kenya Christian Defense of Female Circumcision: A Treatise