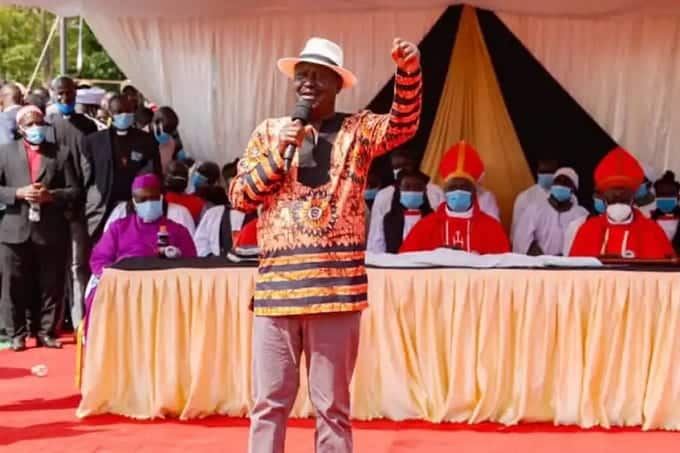 “We’re Assembling Heavy Machine”: Opposition chief Raila Odinga has warned of a political Tsunami ahead of the 2022 General Election, saying that he is assembling a strong team that will scare his political opponents.

Raila, who spoke in Siaya county on Saturday, June 26, during the burial of former Gem MP Jakoyo Midiwo, indicated that the line-up he is assembling would sweep across the country the same way the Tsunami causes disruptions in areas that it hits.

The lawmaker died on Monday, June 14, according to information by the Orange Democratic Movement party to which he belonged.

Commenting on the 2022 General Election, the Orange Democratic Movement (ODM) party leader urged his supporters to trust the process.

“All I can tell you is that we are assembling a heavy [political] machine. They (opponents) don’t know what is in store. A strong Tsunami is coming. So I’m urging you [my supporters] to trust me; we know where we are going,” Raila spoke metaphorically. The former prime minister, accompanied by his wife Ida Odinga, also took issue with Deputy President William Ruto’s bottom-up approach to stabilise the economy.

Raila observed that a country’s financial health could be improved by strengthening policies at the macro level.

“Bottom-up economics should be taken to the dustbin. But, unfortunately, there is nothing like a bottom-up approach when it comes to the economy. What would you be doing with a wheelbarrow or a handcart in the quest to improve the general economy?” posed Odinga. Political leaders drawn from both the ODM and Jubilee parties have in the recent past hinted at an alliance between the two political outfits, with multiple reports emerging that President Uhuru Kenyatta is likely to settle on backing an Opposition candidate in 2022.

But on Thursday, June 24, Ruto termed the looming merger between the two parties as the most tragic thing that has ever happened. Speaking to KTN News, the second in command regretted that the ruling party did not consult its members over the matter.

‘How do you take a party with over 200 MPs, senators and governors not mentioning MCAs then without an iota of consultation, without a single meeting, without any reference come up with such a decision,” said Ruto. This even emerged that Uhuru has reportedly asked the Opposition politicians to unite and pick one person he will root for in next year’s polls.

At the same time, Raila expressed confidence that the Building Bridges Initiative (BBI) will see the light of the day. ”The BBI matter is in the courts, but then we have assembled our team of lawyers led by senator James Orengo. We are confident that through this competent team we are going to succeed,” Raila said. He indicated that the BBI process is currently at halftime, but it will soon move forward.