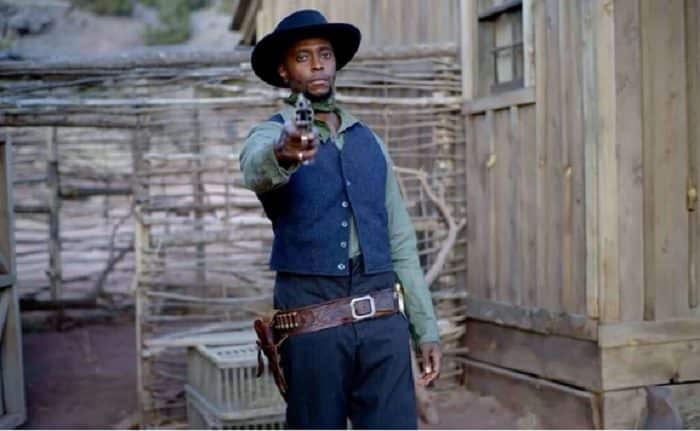 Kenyan Diaspora Edi Gathegi was one of the core actors in the movie produced by Jay Z and other Hollywood execs; The Harder They Fall.

The movie which also features Idris Elba and Regina King is about an outlaw who discovers his enemy is being released from prison and reunites his gang to seek revenge.

It is one of the very few cowboy movies whose principal cast members are all black. Although its is a fictional film, its characters are based on real cowboys, and outlaws of the 19th-century American West.

Gathegi plays the character of Bill Pickett who was the best-known African American rodeo performer of all time.

Pickett invented the rodeo sport of bulldogging which involves wrestling a young bull to the ground by grabbing its horns.

Edi Gathegi said in a recent interview that it was intriguing to be part of the movie where the key actors were all black adding that many times cowboys were depicted as white people.

“So among the hotheads, I would say that he’s actually the cooler head that prevails. He’s loyal, perhaps loyal to a fault. Grounded. I would say he’s maybe the moral compass of the crew. He’s a sharpshooter; he’s the one that watches over everybody makes sure that his gang is safe.”

To prepare for his role Gathegi has to read up on the history of his character and understand his historical significance.

“Well, I knew about my character, but I didn’t know that my character actually died by getting kicked in the head by a horse, which is a pretty tragic way to go,” Edi said.

He added that Netflix poured a lot of money to make the set believable instead of using computer-generated graphics.

Kenyan man Gilbert Owuor to star in the ‘Emancipation’ movie…