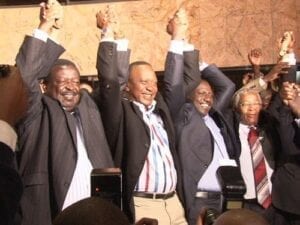 The deal will now see one Deputy Prime Minister Mudavadi of the United Democratic Forum (UDF), battle it out with another DPM Kenyatta of The National Alliance in presidential nominations, while United Republican Party’s William Ruto stay put as the coalition’s deputy president.

Ruto, who spoke ahead of his two coalition partners at the Laico Regency, affirmed that the coalition aims to win the 2013 General Election in the first round.

“When we said that we want to win in the first round we meant business; one of the two gentlemen sitting beside me, God willing, will be the fourth president of Kenya,” Ruto said describing them as from the ‘Jubilee Age.’

Ruto said that both Kenyatta and Mudavadi had promised to give their support to whoever emerged winner in the presidential nominations, which will take place within the next 14 days.

Mudavadi: I am ready to team up with Raila Odinga for 2017…

Expelled UDF senator Wangari says Mudavadi has no powers to…

The coalition pact, which also includes Mvita MP Najib Balala’s Republican Congress party was quickly crafted on Tuesday afternoon; and was seen by observers as an offensive to the challenge posed by the Raila Odinga, Kalonzo Musyoka, Charity Ngilu and Moses Wetangula Coalition for Reform and Democracy (CORD), launched on Tuesday lunch-time.

It’s understood that Mudavadi had engaged in lengthy discussions with Kenya National Congress candidate Peter Kenneth and KANU’s Gideon Moi throughout Monday night with the aim of forming a coalition, but Eugene Wamalwa of New Ford Kenya threw a spanner in the works when he declined to join forces with the Sabatia MP.

The legislator said that the coalition agreement which took long hours to arrive at gave the Kenyan voter the best choice that will stabilise the nation.

Said Musalia: “We have agreed that it is important that we present a united front for the people of Kenya so that they can vote for a stable government, which this coalition presents. I am working with individuals who have worked tirelessly for this country and want to continue working to ensure that we do not have a divisive but coherent society.”

He added that: “Our motto has been to win the election in round one; we do not want to subject Kenyans to extra time when they are making a decision about their government.”

Kenyatta on his part maintained that the pact coalesced around the ideals of meeting the needs and priorities of the people, and making Kenya a better nation.

“The addendum we add to that coalition does not make us a coalition against anybody…Ours is to ensure that Kenya does not go through what it went through close to five years ago. Our role is to ensure that Kenya looks at the next 50 years with unity and prosperity,” Kenyatta said, adding that a united Kenya was capable of becoming a middle income country in 10 years.

The last day for depositing pre-election coalition agreements with the Registrar of Political Parties was not without intrigue for Mudavadi.

The media had been asked to prepare to cover the signing of an agreement between Mudavadi, Kenneth and Moi on Tuesday at 1pm at Nairobi’s Freedom Corner, but this was not to be.

The media was then told that Kenneth would address a meeting at the Norfolk Hotel at 2.30pm, possibly to sign a deal with Mudavadi but this too came a cropper.

Later on Tuesday, the media was alerted that Mudavadi would be heading to Ruto’s private office to seal the deal but again it turned out to be a wild goose chase.

Towards 6pm, party representatives headed to the Registrar’s office to deposit the agreement as their parliamentary allies waited at the Laico Regency Hotel.
Source:capitalfm.co.ke

‘Poverty stricken’ Luos do not belong to your mother, MP Wanga tells…