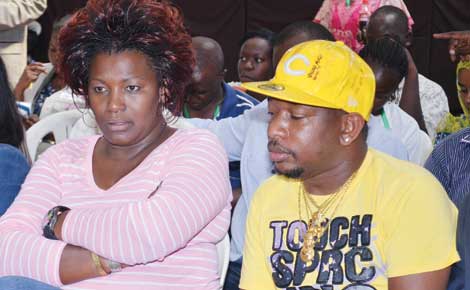 NAIROBI, KENYA: Nairobi Senator Mike Mbuvi Sonko has denied claims that he paid youth to leak photos of himself and Nairobi Women’s representative Rachael Shebesh. Suggestive photos of Sonko and Shebesh flooded social media last week, following reports that the two had fallen out in a fiery meltdown at Parliament buildings late into the night.

Blogger Roy Ogolla, who admits to publishing a photo of the two, accused Sonko of paying off youth to peddle the suggestive images.  When pressed to reveal the names of the youth whom he claimed were paid by Sonko, Ogolla refused saying his journalistic ethics could not allow him to reveal his sources.

Ogolla proceeded to refute claims that he edited the photos making rounds on the internet. “Sonko falsely claims that I photo-shopped the images. Let me set the record straight: I did not disseminate images, photo-shopped or real, of Sonko and Shebesh.  I only posted one, and I did this because I felt that it was my responsibility as a resident of Nairobi,” Ogolla said.

In a fiery rejoinder on Radio Maisha’s breakfast show, Senator Sonko rubbished Ogolla’s statements chalking them up to malicious propaganda. “To say that I gave youth money to publish such photos is propaganda.

I am a leader and I have a family, why would I want to publish photos to taint myself?” Sonko posed. The Nairobi leader went on to say that he neither knew Ogolla nor gave him money for any reason. When asked why the blogger would make such claims, Sonko said that Ogolla was chasing fame by picking fights with politicians.

Sonko, who has been publicly close to Shebesh in the past, went on to deny that he was romantically involved with the Nairobi Women rep. “I loved Racheal Shebesh, but as a sister-not in the bedroom manner,” Sonko said.

The relationship between the two Nairobi leaders has been the topic of extensive media discussion in recent weeks. Reports that the two have had private meetings in exclusive Nairobi hotels raised eyebrows about the nature of their association.

Following the reports, Shebesh’s husband was reportedly summoned by Luhya Council of Elders to answer charges of failing to manage his household. -standardmedia.co.ke

Behind The Scenes photos of Teacher Wanjiku’s Airtel Ad

unrealized rights – Is Kenya Diaspora considered a “Minority or Marginalized…