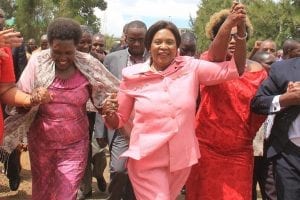 Mary Wambui has retained her seat as the Othaya MP after the Supreme Court set aside a decision of the Court of Appeal that had earlier nullified her election.

All the seven judges of the Supreme Court unanimously agreed that the petition challenging Ms Wambui’s election was marred by technicalities and should not have been entertained by the High Court in the first instance as it was filed out of time.

“In the circumstances, Ms Wambui’s contentions are allowed and the Court of Appeal’s decision which nullified her election is declared null and void,” said Chief Justice Willy Mutunga on behalf of the bench.

The judges restored the declaration by the Independent Electoral and Boundaries Commission (IEBC) on March 4, 2013 which gave Ms Wambui the victory for the Othaya parliamentary seat.

Ms Wambui’s election was challenged by Peter Gichuki King’ara who claimed that the election was marred by irregularities and electoral malpractices.

The initial petition at the High Court was dismissed but Mr King’ara appealed the decision at the Court of Appeal.

Judges Alnashir Visram, Martha Koome and Otieno Odek of he Court of Appeal gave him a second chance to square it out with Ms Wambui at the ballot by declaring that the elections were not free and fair.

Othaya MP Wambui retires from politics, to campaign for…

KIBAKI IS MY HUSBAND, SAYS WAMBUI

Why does Mary Wambui suffer on Valentines?

Ms Wambui then moved to the Supreme Court in a bid to retain her seat claiming that the Appellate Court exceeded its powers in nullifying her victory.-nation.co.ke