Embattled Budalang’i MP Ababu Namwamba blames his woes in ODM on what he refers to as succession politics in Luo Nyanza, the bedrock of party leader Raila Odinga.

In an exclusive interview with the Sunday Nation after appearing in public with Mr Odinga following a stormy week, Mr Namwamba explained that certain MPs from the region had declared war on him because of the perception that his political star was rising fast, and he could play a bigger role in the party when Mr Odinga exits the scene.

“Post-Raila succession is at play here so that anybody who appears to have the capacity to outshine them becomes an enemy; some see in me a potential threat to their careers,” the lawmaker said.

He harked back in history to the time when Mr Odinga was involved in an lmost irreparable fallout with the late Vice-President Michael Wamalwa over who would assume the mantle of leadership from the doyen of opposition politics Jaramogi Oginga Odinga, Mr Odinga’s father.

“When Musalia Mudavadi wanted to be the ODM presidential candidate, he was branded a spoiler. That is the same way they waged war on the former VP Wamalwa when it became apparent that he was the heir to the throne of Jaramogi,” he said.

“When they want to fight you, they first brand you. Mine has been a case of giving a dog a bad name and killing it. I am a humble person who does not disturb the pecking order, but I have a problem with anybody who tries to stop me from realising my full potential,” he said.

A number of MPs from Luo Nyanza such as Dr Oburu Oginga are on record as saying that Mr Namwamba had “gone to bed” with their political enemies. The Budalang’i MP accuses them of being ungrateful.

“When I led campaigns for Mr Odinga across the country last year, I was a general. When I went against Amani leader Musalia Mudavadi’s wave in Mulembe land (Luhyaland) to drum up support for our candidate, I was still a general, but the moment I expressed interest in the ODM secretary-general’s post, I suddenly turned into a mole,” he said, adding that even a foot soldier must at some point climb through the ranks.

“Ababu forgets that he is largely a Luo candidate. About 45 per cent of voters in Budalang’i are Luo, and they vote for him almost to a man. It is a fallacy, therefore, to say that we have something against him. He was also warmly received when he was campaigning to be the party secretary-general,” he says.
Mr Kaluma also accuses his colleague of diverting public attention from the ongoing referendum crusade in the last few days.

“I read mischief in his timing. Why would he dwell so much on trivial party issues at a time our eyes are trained on something bigger like the referendum? He has no genuine grievance because, to me, he is one of the most privileged members of ODM who sit in all decision- making organs,” he adds.

Former Westlands MP Fred Gumo also accused MPs like Gladys Wanga (Homa Bay Women’s Representative) and Jakoyo Midiwo (Gem) of behaving as if they have more rights in ODM than other members.

“Namwamba is just a young man who was trying to be the party secretary-general and was poised to win. Some appeared not very comfortable with this and declared war on him. I supported him on this quest, and I still do.

“Raila must discipline these guys and tell them to go slow. They cannot afford to chase the few people they have because the moment you start removing people, there are dire consequences. Namwamba is fairly popular in Western and the whole country as a member of ODM; you kick him out, the whole of Western goes,” the former minister said.

Ruling out the possibility of quitting ODM, Mr Namwamba says some of the MPs urgently need prayers to drop their diatribe against him and others who mean well for the party but are misunderstood.

“I cry for them every day. It is like the gods have earmarked them for destruction. Just as was the case in Greek mythology, the gods rob such individuals of their senses so they can neither see nor hear. We need to fast and pray for them to break the spell,” he said.

In what may further ruffle feathers in ODM, Mr Namwamba says there is an urgent need for Luhya unity that he said has the key to unlocking greater potential the western region possesses.

“Do not allow yourselves to be taken for granted or play second fiddle because we are not anybody’s colony and our hands are equally not tied. You have the brains and the numbers.

“History has also shown that you can produce greater leaders like Kijana Wamalwa. And to our brothers and sisters from other regions that we are in this business with, we demand respect in the same measure of sincerity we have continuously shown you,” he said.

The two-term MP, who also chairs the Parliamentary Accounts Committee, argues that only one bullet remains in Mr Odinga’s political gun, and ODM cannot, therefore, afford to waste it on unnecessary internal wrangles.

Mr Namwamba has also been accused of having been funded by Jubilee when he launched massive campaigns ahead of the botched party polls in February 28.

Mombasa Governor Hassan Joho has since come out to defend him against the accusations, saying he bankrolled the campaigns in which “Team Fresh” traversed the country in choppers.

“Team Fresh was a war council for Mr Odinga’s 2017 campaigns, and we were going to deliver,” he said of the outfit.

But as Mr Namwamba points the finger at Luo politics in explaining the genesis of his troubles, there is also a possibility that he is a victim of the vicious wars to control the western vote basket ahead of the 2017 elections.

The coming in of Bungoma Senator Moses Wetang’ula last year to work with ODM under Cord, where he is a co-principal, and indications that the party leadership initially favoured Funyula MP Paul Otuoma to be the new chairman, are some of the reasons that have been advanced to explain the high energy he showed in the last eight months.

Both Mr Namwamba and Mr Otuoma come from Busia County.

Analysts say the situation has seen the MP fight tooth and nail to retain prominence as one of the key players in the region even as his allies from western see Mr Wetang’ula as a Johnny-come-lately who has spoilt for Mr Namwamba. He, however, dismisses this argument.

“Competition in any region is normal; but importantly, I do not consider any of my brothers in western as a threat; I see them as part of a team with great potential to help out people,” he says.

With Mr Mudavadi’s political fortunes uncertain, a number of politicians from the region are jostling to be its spokesperson, although none has been able to achieve this yet.

Details have emerged of the three-hour closed-door meeting on Wednesday between ODM leader Raila Odinga and MPs allied to Mr Namwamba over recent wrangles in the party.

According to sources who were in the meeting, Mr Odinga was expecting Mr Namwamba alone and was surprised when he turned up in the company of five lawmakers, including Kakamega Women’s Representative Rachel Ameso, Sirisia MP John Waluke, Shinyalu MP Silverse Anami, Mumias West MP Johnson Naicca and North Mugirango MP Charles Geni.

One of the MPs confided to us that the strategy was to give Mr Namwamba more bargaining power in the course of the meeting as opposed to if he were alone.

We also gathered that as soon as the meeting began, Mr Namwamba confronted Mr Odinga’s brother, Dr Oburu Oginga, over claims that he had “gone to bed” with the Jubilee government.

It is at this point that Dr Oburu is said to have apologised.

“Mr Namwamba told the meeting he had served Mr Odinga with dedication and loyalty for 10 years and did not deserve the kind of treatment he has been getting in ODM lately,” another source added.

Asked about the deliberations, Mr Mwaura was guarded but told the Sunday Nation it was agreed that a follow-up meeting of fewer individuals would be necessary.

“I’d rather not comment on details of the meeting; the only thing I can say is that we agreed that another meeting would be held to iron out a number of issues in the party,” he said.

Contacted about the meeting Mr Namwamba stated: “I would be breaching the trust bestowed on me by the party. All I can say is that just like you know, we met the party leadership on that particular day”. 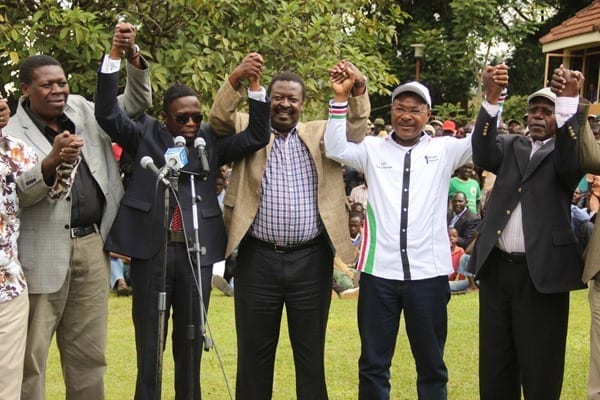