Esther Arunga’s life unfolds like TV drama
Esther Arunga and Quincy Timberlake’s life plays out like a spellbinding script in a drama series, with new episodes every month.

The latest is Quincy’s arrest over the death of their three-year-old son on June 18.

A young, beautiful, fashionable and stylish news anchor, who seemed like she had everything going for her, meets and falls for “bad boy” Quincy Timberlake, who turns her world topsy-turvy, causing her to denounce her family and friends.

When the Nation sought a comment from Esther’s mother, Mrs Petroline Arunga, on Tuesday, she was a disturbed woman who had not spoken to her daughter in three years and only learnt of Quincy’s arrest from media.

“I don’t have her contacts,” Mrs Arunga said. “And neither does she call us. We haven’t spoken since 2011 and that is a known fact even in media circles.”

How does it make her feel, that her daughter is all alone in a foreign country, with a dead son and husband in custody with nobody to console her?

“Anyone with a family would understand how I feel.”

Video:Quincy Timberlake “killed son to save him from…

Like Mrs Arunga, she has not spoken to her son since he left the country in 2011. In fact, it was when we called that she learnt her son had been arrested in Australia.

The last time she tried to reach him through journalists, Quincy never responded.

“I feel pained, as a mother,” Mrs Wambita says. “I don’t know how to express my feelings.”

She is well aware of her son’s efforts to denounce his roots and his family. Quincy has told his friends that he lost his mother to Aids when he was a child. To others, he has claimed his mother lives in South Africa.

In fact 57-year-old Mrs Wambita is alive and lives in Kisumu’s Manyatta slums.

Nothing about Quincy seems to be straightforward. Not even his name.

His mother says that she gave birth to Quincy in 1976 at Homa Bay District Hospital and named him Sammy Joginder Singh Wambita after the famous rally driver, Joginder Singh.

He is the firstborn of eight children, according to his mother.

“He was a very mean boy. Nobody would dare touch his rubber (eraser) or pencil,” Hellon recalls.

The two classmates were reunited after Quincy contacted Hellon in 2009, following Hellon’s appearance on a TV show.

“He claimed he was in the USA and was involved in the music business. He said he was coming back to Kenya and wanted to see what we could do together in the world of music,” Hellon says.

In 2010, Quincy knocked on Hellon’s door in Runda estate, Nairobi, with two suitcases and a passport. He told Hellon that he had been living with a friend for a few days in Hurlingham and would only live with Hellon for a few weeks as he found his footing.

In the same house, a beautiful girl was living with her cousin. Her name was Esther Arunga.

The two squatters in Hellon’s house developed a liking for each other and soon became inseparable.

Quincy and Esther lived in Hellon’s house for two weeks before hell broke loose and they were all arrested for being members of an unlawful society — the infamous Finger of God Church owned by Hellon.

She would later marry Quincy while he was behind bars and the couple would quietly leave for Australia. 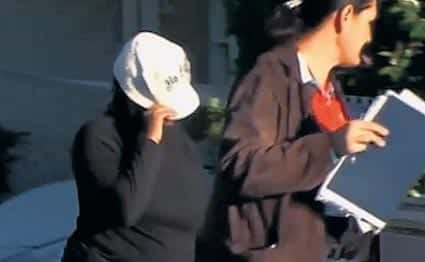