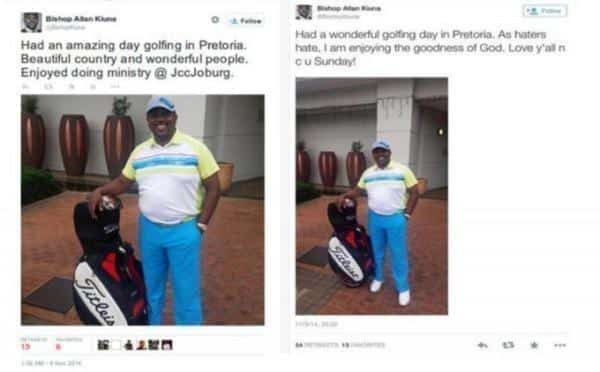 For the second time in as many days, another man of the cloth is courting controversy, this time in the person of Bishop Allan Kiuna of the Jubilee Christian Center.

The flashy cleric who is no stranger to media attention took to Twitter to announce his imminent return from a trip to Pretoria South Africa where he was “doing ministry” at JCC Johannesburg.

Whether in a moment of ‘madness’ or in a moment of oblivion to the how easily posts can be picked off the microblogging site even after being deleted, Kiuna asked his alleged detractors to keep at it as he “enjoys the goodness of God”.

Upon realising the error in the post on Twitter in which he said, ”Had a wonderful golfing day in Pretoria. As haters hate, I am enjoying the goodness of God. Love y’all n c u Sunday!”, Kiuna deleted the post.

He then replaced the post with another edited version that was less offensive to online readers.

Some of his ardent followers defended the posts saying that the edited post was what had been intended for sharing and that the offensive one had been edited to spread propaganda.

PHOTOS: Kiuna’s, part of wealthy Kenyans with most… The two photos placed side by side show the difference in timings and as such show that though the initial post was deleted, it had been put up first.

The Kiuna family was previously in the spotlight when Reverend Kathy Kiuna said they do not host church members in their palatial Runda home to keep their church life and their family life separate.

Ironically however, some of the sermons at the JCC church where both Allan and Cathy Kiuna are present are characterised by public displays of affection as the two regularly teach about marriage.

The Twitter gaffe by Bishop Allan Kiuna becomes the second major incident involving a cleric in recent days after ‘Prophet Dr’ Victor Kanyari of the Salvation Church Ministries was exposed to be coaching people to act healed or delivered in order to grow his following.

Kanyari who has now fled his matrimonial home leaving his gospel singer wife Betty Bayo was shown to involve trickery in order to convince his congregants of miracles being true.