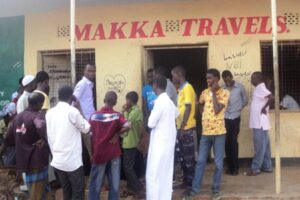 Twenty-eight people were killed on Saturday morning after Al-Shabaab militants attacked a Nairobi-bound bus in Mandera near the Kenya-Somali border.

Mandera County Commander Noah Mwivanda said the militants hijacked the bus and forcefully drove it off some metres away from the main road.

“The militia ambushed it at around eight kilometres shortly after it left Mandera Town between Omar Jillow and Arabia” the county police boss said.

The Al-Shabaab militants forced all passengers to alight before sorting them into two groups based on their faith, before executing the targeted victims whom they identified as non-Muslim, he said.

“I can confirm to you that there was an unfortunate incident where we lost 28 people and we are now in the preparation of sending security reinforcement, medical staff and ambulances to retrieve and transport the bodies of the deceased to Mandera town,” Mr Mwivanda said on Saturday.

Al-Shabaab Islamists claimed responsibility for the attack, saying it was in revenge for raids that Kenyan security forces carried out over the past week on mosques in the port city of Mombasa, AFP reported.

“The Mujahedeen successfully carried out an operation near Mandera early this morning, which resulted in the perishing of 28 crusaders, as a revenge for the crimes committed by the Kenyan crusaders against our Muslim brethren in Mombasa,” AFP said, quoting a statement by Ali Mohamud Rage, Al-Shabaab’s spokesman.

Mr Mwivanda said those executed in the Saturday attack included four policemen, who had been heading home for their annual leave.

Most of those killed in the attack were teachers and health workers who had been posted to the area, he said.

The county police boss said the military were pursuing the attackers. Earlier, he had said there were plans for an aerial surveillance of the area before dispatching the security team.

He said this was because a similar attack late last year at the area was used as a trap, in which eight police officers were killed.

We are told these people are well armed and we can’t just go like that since it could be a trap, just like in the past, said Mr Mwivanda.

In the morning, Mandera East deputy County Commissioner Elvis Korir said initial reports indicated that about a 100 armed militia stopped the bus and ordered everyone out.

He said the attack happened as the bus — from Makkah Travels firm — climbed the hills of the notorious Omar Jillo area in Arabiya Ward, Mandera East Sub-county.

“We are told a hundred armed men stopped the bus just after it left Arabiya area and all the passengers were asked to come down. They were then divided into two groups, of Somali and non-Somali,” said Mr Korir.

He said the non-Somali group was sprayed with bullets as the other group watched in disbelief.

Relatives of passengers believed to have travelled on the ill-fated bus milled outside the Makkah Travels offices in Mandera Town.

Records at the office indicated that 59 passengers were booked to travel to Nairobi.

Earlier in the day, Abdullahi Abdirahman, the Arabiya Ward Representative noted tha the place has been prone to attacks.

“This place has been prone to attacks, this is not the first time the government has totally ignored us, and you can now see the how many innocent precious lives have been lost,” he said.

Bodies of the victims were in the afternoon transferred to Mandera Airstrip to be airlifted to Nairobi.