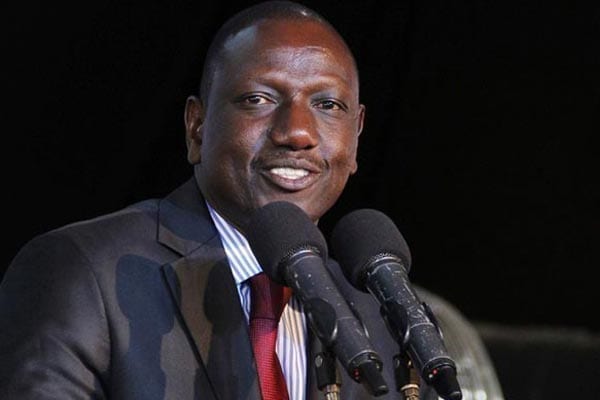 A highly realistic portrait of Kenyan Deputy President William Ruto is among 11 paintings displayed in a New York gallery on the theme of international justice.

The Ruto portrait, which is on sale for $6,500 (Sh585,000), depicts him close-up in an unsmiling pose that may strike some viewers as defiant. The 21-by-15 inch work is so detailed that it includes a faint scar on the bridge of the deputy president’s nose. Mr McCallum says he executed this and the 10 other pieces grouped under the heading “Portraits of Justice” without any political agenda.

His aim, he says, is not to imply the guilt or innocence of the people he painted.

Instead, Mr McCallum says, he seeks to raise public awareness about the ICC and other institutions established to deliver justice for victims of atrocities.

“I’m not pigeon-holing the paintings in any particular political discussions,” Mr McCallum said in an interview with the Sunday Nation. “I’m trying to look at this topic more broadly and more poetically.”

Examples of Gado’s work hang alongside paintings and photos by prominent international artists such as China’s Ai Wei Wei.

Victor Ndula, a cartoonist for the Star newspaper, is also represented in this part of the show, which is entitled “Post-Conflict” and which was curated by Mr McCallum.

NOT LIMITED TO AFRICANS

The US artist says he plans to paint as many as 30 portraits of individuals who have been charged by the ICC and other tribunals.

Asked if a likeness of President Uhuru Kenyatta might be included in that larger group, Mr McCallum said, “It would be important to consider that addition.”

Unlike the roster of those brought before the ICC, the current set of portraits is not limited to African subjects.

Two former leaders of Cambodia’s Khmer Rouge, both convicted of crimes against humanity by a special tribunal in Cambodia, are on display.

There is a portrait of Radovan Karadzic, a Bosnian Serb on trial for genocide at the Hague-based International Criminal Tribunal for the former Yugoslavia.

Three Congolese charged with war crimes are depicted in the show, as is former Liberian leader Charles Taylor, who was sentenced to a 50-year prison term at the conclusion of a trial by a Hague-based special tribunal for Sierra Leone.

Mr McCallum wants his eventual set of up to 30 portraits to be shown in venues around the world.

The works will first be displayed in The Hague in 2016. “It would be wonderful” if the portraits could be seen in Nairobi or another African city, Mr McCallum says.

The Brooklyn resident says he was inspired to undertake these paintings as an outgrowth of his longstanding interest in social issues.

He travelled to The Hague two years ago to observe ICC proceedings with the objective of “integrating into my art institutions involved in international justice.”

Attending ICC trials gave him an appreciation for the “complexity” of the court’s work, he says, adding, “I’m hoping the portraits capture that complexity.”

Viewers can also “feel the time and attention that went into making these paintings. It’s similar to the time that goes into the judicial process.”

Mr McCallum, who earned a master’s degree in sculpture from Yale University in 1992, made contact with the Coalition for the International Criminal Court while in the Hague.

The coalition, a New York-based NGO that seeks to build support for the ICC, agreed to enter into a partnership with Mr McCallum, who has been paid $15,000 (Sh1.35 million) for his work.

Coalition leader William Pace says his group agreed to assist because “the intersection of art, human rights and justice is enormously important.”