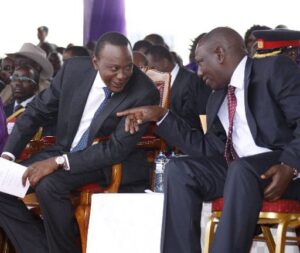 President Uhuru Kenyatta and his Deputy William Ruto have been asked to resign and seek fresh mandate from Kenyans following a decision to merge their political parties.

Bomet Governor Isaac Ruto said it was wrong for the two leaders to give their blessings on the merger without consulting their respective party members.

“We were shocked to learn that the President and his deputy have already registered a new party – Jubilee Alliance Party – whereas they were still members of their former political parties,” he said

“Why should the two leaders mislead Kenyans that The National Alliance (TNA) and United Republican Party (URP) will be merged ahead of the next general election when already the Jubilee Coalition will be presenting a candidate for the Kajiado Central parliamentary seat by-election,” he added.

Speaking at the proposed Bomet showground after flagging off 12km men race, the Governor who was accompanied by Silibwet/Township Ward Representative Robert Metet said it was clear that by forming the new party, the two leaders had become disloyal to the parties that sponsored them to power.

“They have no business holding onto their seats,” he said.

Mr Ruto said political parties have organs that make decisions on the direction which the party wanted to take on any given issues but for this case, the Deputy President had not consulted his United Republican Party (URP) members on the new development.

“We are in URP to stay and we are not about to defect to the new party”, he noted.

The governor urged leaders to embrace consultative leadership instead of making irrational decisions which might not augur well with the party supporters.
Mr Metet echoed the governor’s sentiments and petitioned the deputy president to desist from making decisions on party issues single-handedly.

Cord to be registered as a political party- Kalonzo