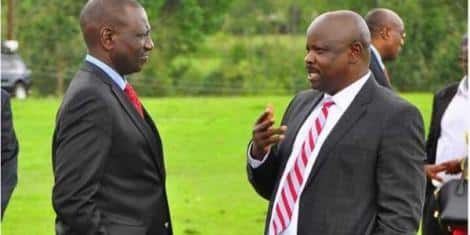 Former Bomet Governor, Isaac Ruto, has spoken out to allay speculations of a union with President Uhuru Kenyatta. In a statement issued by Chama Cha Mashinani (CCM), Isaac Ruto stated that he was ferrying his wife to work in Nairobi.

“My attention has been drawn to claims circulating in the social media that I was picked today, Wednesday, May 13, 2020, by a chopper from my Tumoi residence in Bomet County and flown to State House Nairobi. I wish to clarify that indeed I travelled to Nairobi this morning using a helicopter with my wife who is in the essential service sector, and who was required to transact official business in her office.

“Travel by helicopter is not unusual as it is in the public domain that I have been using the same means of transport regularly. Finally, I wish to set the record straight that my travel had nothing to do with the political realignments in the country as is being speculated in the media,” Isaac Ruto clarified.

Photos of a chopper that was sent to pick the Chama Cha Mashinani (CCM) party leader from his Tumoi, Chepalungu home in Bomet County were shared on several social media platforms and is currently trending at number one. However, efforts to reach the former governor for a comment were futile.

The meeting between Isaac Ruto, a fierce rival of Deputy President William Ruto, and Kenyatta comes at a time when the Head of State and DP Ruto are embroiled in what has been described as a cold war.

Kenyatta has seemingly isolated DP Ruto from the government, ejecting one of the DP’s allies from Cabinet, removing Ruto’s diehards from the party Senate leadership and changes expected in the National Assembly too.

On Tuesday, May 12, Elgeyo Marakwet Senator Kipchumba Murkomen was ousted from his Senate Majority seat and was replaced by Kenya African National Union’s  (KANU) Samuel Phogisio, the West Pokot Senator.

This was after the DP and his allies launched attacks at Kenyatta over his administration, his legacy and relationship with Orange Democratic Movement (ODM) leader Raila Odinga, which was birthed by the famous March 2018 handshake.

Reports of looming Cabinet changes have been rife and it is not clear whether Isaac Ruto will be poised for a Cabinet role as Kenyatta is expected to kick out DP Ruto’s allies from the Cabinet. In January 2020, former Agriculture CS Mwangi Kiunjuri, a close ally of DP Ruto was fired, and reports allege that Energy CS Charles Keter may be on his way out too.

Other reports argue that Isaac Ruto may have been approached by Kenyatta to thwart DP Ruto’s influence in Rift Valley after the Jubilee Party entered into a post-poll coalition agreement with Baringo Senator Gideon Moi’s KANU.

Gideon is also Ruto’s fiercest Rift Valley rival with the two garnering for the 2022 presidency, driven in part, by a quest for Rift Valley kingship.

Isaac Ruto seemingly has influence in Bomet and Kericho Counties, and a little dent on DP William Ruto’s backyard will derail the latter’s hopes for power.

“Those underrating the former CoG chairperson do so at their own peril. The DP is still stronger in the Rift Valley, but the former Bomet governor also wields considerable support, especially in his base in the South Rift region and among some of his colleagues.

“Isaac is like a little ant which was challenged by an elephant for a fight. The ant got into the jumbo’s trunk and found its way to the giant animal’s brain and ate it. The elephant dropped dead. Former Governor Isaac Ruto has the potential to politically kill the career of the DP if he is not handled well,” political analyst Barrack Muluka once described Isaac Ruto in an interview with the Standard.

Muluka, while speaking with Kenyans.co.ke on Wednesday, May 13, added that Isaac Ruto may be used to curtail Ruto’s influence in Rift Valley, but the move would be risky as it depends on how the Kalenjin community would react.

“Whether it succeeds or not, it would depend on the public reaction in Rift Valley. Will they feel that they have been betrayed or it would not matter? Would they still want to work with the government or the new leader being imposed to replace DP Ruto will be perceived to be a traitor?

“Remember there is a certain way DP Ruto has represented the Kalenjins who still hold on Kenyatta’s promise to let the DP govern for 10 more years after 2022,” Muluka stated.

Nafula Kisiangani, a Development Practitioner further added that Isaac Ruto would be benefiting from any role assigned to him by Kenyatta as opposed to only being used to replace DP Ruto. The political analyst stated that the former governor was also trying to revive his career.

“Uhuru fears losing Rift Valley and he is trying to consolidate Ruto’s rivals in the region. We saw how he accorded Gideon Moi powers through Senate changes. At the end of the day, Isaac Ruto is also a politician and will benefit from any position granted to him by the head of state,” Kisiangani stated while speaking with Kenyans.co.ke.