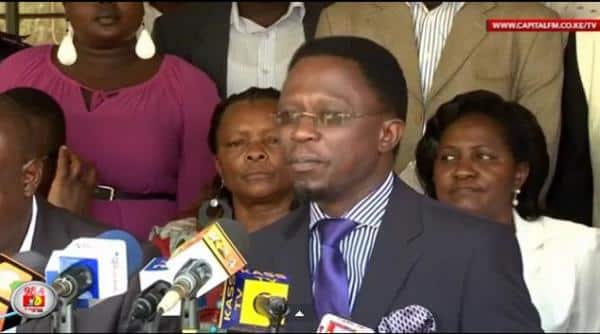 NAIROBI, Kenya Jan 7 – The Orange Democratic Movement (ODM) says it is confident of recapturing the Kajiado Central parliamentary seat which became vacant after Joseph Nkaiserry resigned to take up his appointment as Interior Cabinet Secretary.

Speaking after a joint National Election Committee (NEC) and the National Elections Board (NEB) meeting, ODM Secretary-General Ababu Namwamba said they will embark on an aggressive campaign to ensure they retain the seat.

“We together with our partners in CORD shall mount a vigorous campaign in the constituency with the sole aim of recapturing the seat.”

Namwamba added: “The party leadership has planned an extensive tour of Kajiado Central Constituency starting next Wednesday the 14th of January 2015. We would like to assure our supporters in Kajiado and the entire country that we shall field a popular candidate to face off with our opponents in the March by-election.”

The party officials thanked the electorate in Kajiado for going against the grain during the 2013 General Election and electing Nkaiserry and Kajiado County Governor David Nkedianye who ran on an ODM ticket.

“We don’t take your enormous support for granted. We look forward to continue working with you,” he said.

ODM Chairman John Mbadi and Namwamba pledged a fair process will be used to pick a popular candidate for the poll slated for mid March.

“We have been in office for slightly over a month now, I think things must change in the way we handle the process. Just watch us,” Mbadi told a news conference.

The party has been blamed for its handling of the Homa Bay senatorial nomination process which turned chaotic leading to the party handing a direct nomination to Moses Kajwang’ which sparked protests and defections from three candidates.

ODM NEB Chairperson Judy Pareno had earlier stated that applicants interested in running for the Kajiado Central by- election have until Friday to submit their applications.

Nkaiserry who was elected on an ODM ticket, resigned on Christmas Eve after he was sworn in as Interior Cabinet Secretary.

The Independent Electoral and Boundaries Commission (IEBC) announced that the by-election will be held on March 17 and political parties have until January 29 to complete their nominations.

About 10 aspirants have declared interest in the seat held by Nkaissery since 2002.

They include Simon Peter ole Nkeri, Memusi Kanchori, Patrick Tutui, Anthony Kiroken, a Kenya Wildlife Service pilot, Samuel Seki, who is currently working with the Narok County Government, Ali Letura, Kajiado County Lands Executive and John Leina. Most of the candidates are likely to run on a TNA ticket.

There are reports that ODM is keen on Abraham Koshopa, a United Nations official, who reportedly worked closely with Nkaissery, to be its flag-bearer.