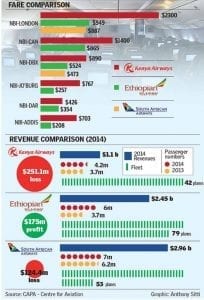 Kenya Airways has defended its higher air ticket prices relative to other airlines, as news also emerged that two Boeing 787 Dreamliners ordered by the national carrier are being held in storage in the US.

KQ chief executive Mbuvi Ngunze on Thursday said the airline’s tickets are only priced higher during peak demand, when travellers book late and according to quality of services.

Travellers and analysts have recently faulted the loss-making airline, arguing its pricing strategy was driving business away to stronger rivals such as Ethiopian Airlines whose charges are lower.

“Remember we are coming off a fairly high season, the peak period of travel — from June through to August and early September,” Mr Ngunze told a press briefing in Nairobi, adding that the airline was competitive, currently flying between “10,000 and 12,000 people every day.”

The KQ management has been blamed for poor decisions that led to the airline posting a record loss of Sh25.7 billion in the 2014/2015 financial year.

“You could find incidents where, say, eight ticket prices have been booked in the last minute which could trigger that (higher fee), but it is not representative of the average price.” Among the poor decisions being cited is the lack of a fallback plan for the ambitious ‘Mawingu’ expansion project and bad decisions on leasing of aircraft.

Mr Ngunze acknowledged delays in the delivery of two Boeing 787 Dreamliners the airline had ordered from the US but did not provide details.

Kenyan Family disown man who fell from London skies as their…

Kenyan Man who fell from KQ plane into a London garden…

Body of stowaway fell off a Kenya Airways plane near…

The 787s are the final two out of the nine Dreamliner planes that KQ had ordered, following the delivery of seven planes in the past 18 months.

In order to ensure that the company keep afloat, the government has provided short term support by way of a shareholder loans of Sh4.2 billion.

The amount is intended to help the airline meet its financial obligations, particularly paying off crucial creditors like fuel suppliers.

The new loans could help the national carrier complete the financing needed to acquire the remaining Dreamliner planes now in storage in Everett, Washington, a US source was quoted by Reuters as having said on Thursday.

The government owns 29.8 per cent of the ordinary shares of Kenya Airways Ltd, KLM owns 26.73 percent and IFC owns nine per cent.

KQ resumed operations in Liberia’s capital Monrovia in April and Freetown (Sierra Leone) a month later, after it suspended flights to the West African nations following the Ebola breakout which has been managed.

“We were given permission to first sell fifth freedom traffic which means we could only sell traffic between Accra and those destinations,” said Mr Ngunze.