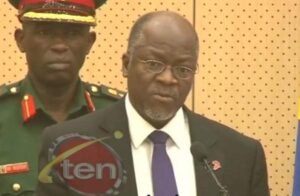 Whether by design or accident, Tanzanian President John Pombe Magufuli may have started some bad blood between him and President Kenyatta and in extension Tanzania and Kenya.

While addressing Tanzania Private Sector Foundation on Thursday last week, Magufuli pointed out practices that will have to stop, naming Brookside as a company that formerly used to ‘exploit his country’

Speaking in Swahili, Magufuli said that in Arusha, Brookside used to collect milk from Maasais in Northern Tanzania, ferry it into Kenya for processing, then ferry it back to Tanzania for sale.

”Do you remember the Brookside company in Arusha? It used to collect milk from the Maasais in northern parts of Tanzania, take it to Kenya for processing then bring it back to us to drink… Enough is enough,” he said.

Brookside was kicked out of Tanzania in 2009 following a government directive that all milk had to be processed locally. The part Kenyatta family owned company has however been planning to re-enter the market.

It will be interesting to see how the relationship between Uhuru and Magufuli turns out to be, considering the newly elected Tanzanian President is a very close friend of opposition leader Raila Odinga.

Nyanza’s moment in the sun as Magufuli and Obama come…