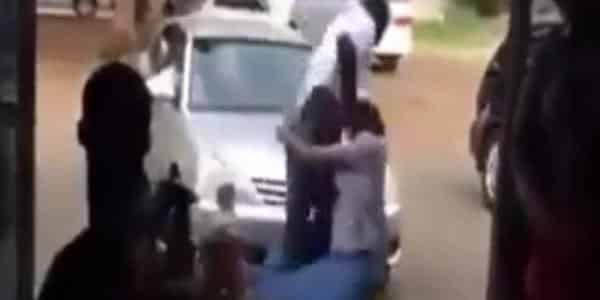 A video circulating on social media, showing an alleged employee of the Nairobi County Government assaulting a businesswoman, has stirred storm online.

The supposed county inspectorate officer is seen in the clip busting into a salon then ripping off a business permit on the wall, then a woman presumably the hair stylist tries to stop him.

The well built kanjo, however, bulldozes his way through, takes the certificate from the wall then grabs her violently before mercilessly dragging her on the floor and ground outside.

Attempts by customers in the salon to stop the county askari  from assaulting the woman, bear no fruit.

According to unconfirmed reports, the incident is said to have happened last week prompting the Nairobi County Government to suspend the officer.

The hineous act was greatly condemned by Kenyans on social media who called for the prosecution of the offender. It is also not known why the brawl ensued between the two.

The incident comes at a time when investigative journalists, John Allan Namu and Mohammed Ali, exposed violent and unscrupulous deals carried out by the askaris.

In the 3 part series, the journalists reveal bribery and cruelty that has even caused deaths among city traders.

Chris Kirubi-from a coffee thief to a real estate Mogul