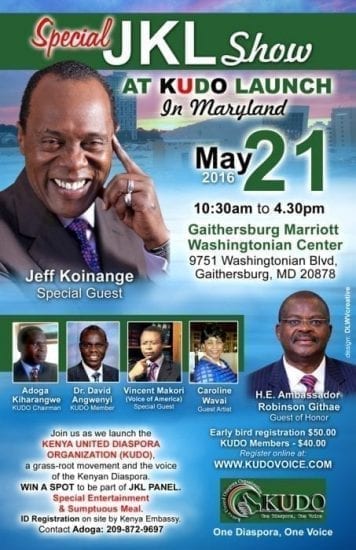 Jeff Koinange, best known as Mr. Oh My, Oh My or Mr. What a show! Will be visiting the US and will produce the first ever JKL show outside Kenya. Jeff has accepted the invitation to be the special guest during the launch of Kenya United Diaspora Organization (KUDO). In addition, Jeff will have a book signing session for his book Through My African Eyes.

Other invited special guests are Kenya Ambassador to the US, HE. Ambassador Robinson Githae, Vincent Makori, anchor of Africa 54-Voice of America’s English television live news magazine show,Adoga Kiharangwa,KUDO chairman among many others.

The Kenya United Diaspora Organization (KUDO) will be formally launched on May 21, 2016 in the Washington DC Metro Area, at Gaithersburg Marriott Washington Center. All Kenyans from the Diaspora are invited to participate by registering at the KUDO Website.

KUDO is a non-political grassroots organization that has been established in an effort to create a more inclusive member directed organization that is responsible to her membership and caters to Kenya’s best interest. KUDO members are spread across all continents with the aim of creating one global voice that positively influence policymakers who deal with issues that adversely affect the Diaspora. Also by sharing knowledge and skills and utilizing economies of scale, Kudo plans partnership with others to bring socio-economic prosperity to her members and their descendants, and to create permanent employment and sustainable economic growth in the Motherland. Learn more about KUDO at the website www.kudovoice.com.

KUDO formal launch would be done in a special event featuring Jeff Koinange, a respectable media personality, with immense experience on issues that affect Kenyans in the diaspora, having himself been part of the diaspora. Jeff Koinange will broadcast the JKL show as part of the KUDO launch program. Join us as we launch KUDO in a special JKL show. Other programs at the launch will include Kenya ID registration conducted by the Kenya Embassy, entertainments and a sumptuous meal.

Jeff Koinange, is one of Africa’s most well-known and experienced television journalists, is known to viewers across Africa from his days as CNN’s Senior Africa Correspondent, a post he held for six turbulent years from 2001-7.

Jeff won plaudits for his reporting of major events from all across the African continent. These include the violent civil war that led to the overthrow of Charles Taylor in Liberia- where he secured an exclusive interview with the outgoing president- to the subsequent inauguration of Ellen Johnson-Sirleaf in Liberia as Africa’s first female-elected president, and the arrest and deportation of Charles Taylor.

He reported from Sudan on the crisis in Darfur and also from Uganda on the refugees who had fled Sudan’s Lord’s Resistance Army. Based in Lagos, he covered Nigeria extensively, its politics, its economy and its people and traveled extensively to numerous other African countries reflecting life on the continent to CNN’s global audience.

Although Jeff was CNN’s Africa Correspondent, his journalistic talents meant he frequently reported from outside the continent. In 2005, he was part of CNN’s Peabody Award winning team that covered the devastation wreaked on New Orleans by Hurricane Katrina. He also reported from Baghdad on the post-war insurgency, reconstruction and the historic elections in Iraq in 2005.

VIDEO: Uhuru should tell Kenyans what is going on between…

Other significant events Jeff covered during his time with CNN included the US President, George W Bush’s Africa tour, the first by a sitting US Republican President.

In 2005 Jeff won a Television EMMY (the only Kenyan Journalist to have ever won one) for coverage of the devastating famine in the West African nation of Niger. Other awards included the George Foster PEABODY award for his coverage of the devastating effects of Hurricane Katrina in 2006, the Vernon Jarrett Bronze Medal in both 2006 and 2007 for ‘Best Feature’ on ‘Mass Rapes in the Congo’ and ‘Famine in Malawi’ respectively.

In 2006, Jeff was awarded the Prix Bayeaux for War Correspondents for his reporting on the civil war in the Congo.

Please join us as we usher in the only organization that is committed to the whole well-being of people of Kenyan descent wherever they are. Photos:Sonko prayed at the Hague and things happened

Kenyan MP’s Score Card-We are keeping record of you