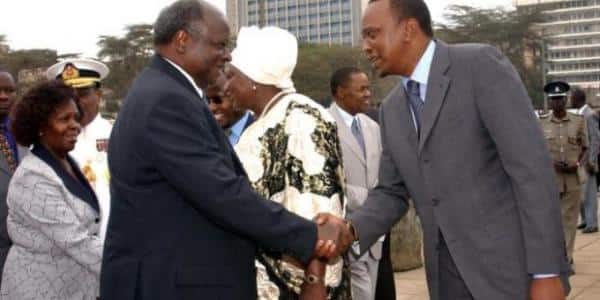 President Uhuru Kenyatta on Tuesday morning announced that the country had lost former First Lady Lucy Kibaki while she was undergoing treatment at Bupa Cromwell Hospital in London.

The announcement came several hours after the incident happened, leaving many wondering why the President broke the news instead of Kibaki’s family.

It has now emerged that the family had to wait for Mr Kenyatta to make the pronouncement in accordance with protocol regarding death of a former First Lady or other State Officers.

According to reports, news of Ms Kibaki’s demise had been communicated at around 7am but they waited until past 11am for the President to inform the nation.

“It was only fair because the State was directly involved, that we leave it to them to make the announcement. There was a sense of protocol to be considered,” one of the family members was quoted by the Nation.

Power Games: The Vice Presidents who served under Daniel…

Retired President Mwai Kibaki’s Spokesman Ngare Gituku divulged that they were organising how Ms Kibaki’s body would be flown into the country for a State funeral.

“Not much is coming from London but people are putting their heads together because of the enormity of the task ahead,” he stated.

The same protocol has previously been used, when the nation lost former Vice-President Kijana Wamalwa whose demise was communicated by the then President Mwai Kibaki.

NEW KENYAN AMBASSADOR TO US EYES PARTNERSHIP AND TRADE