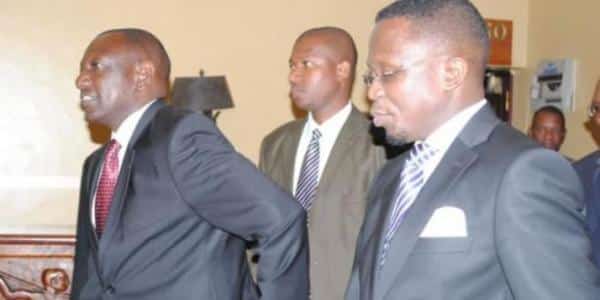 Deputy President William Ruto has been linked to a plan by some ODM legislators led by secretary general Ababu Namwamba to take over Dr Julia Ojiambo’s Labour Party of Kenya.

Ababu has said he has been frustrated by ODM and wants to move where he is appreciated and not merely tolerated.

Multiple sources, some known to be very close to the DP and others working with Ababu, have told the Star that the plan by the two is to take over the LPK and have Luhya MPs, especially from ODM, move to it and thereafter do a deal with Ruto’s URP.

It remains unclear what will happen to the URP-LPK coalition, but sources say Ruto wants to use it to strengthen his bargaining position next year.

Currently, Ruto is in the ruling coalition with President Uhuru Kenyatta’s TNA. Recently, Kiambu Governor William Kabogo told the DP that he will not necessarily the automatic Jubilee candidate in 2022. Kabogo has since apologised to Ruto and accused the media of “misquoting me”.

Otuoma on Monday denied that he, Ababu and several other MPs were planning to leave ODM.

“We belong to ODM,” said Otuoma.

“We strongly rebuke those fond of branding others all sorts of silly names, like ‘mole’. How can it be that when we engage the President we become moles? But when others do the same thing it is regarded as normal business,” Otuoma said.

Two ODM deputy party leaders – Wycliffe Oparanya and Ali Hassan Joho – have accused Namwamba of being responsible for his own problems in ODM.

Ababu’s tenure as SG has been marred by controversy since he was handed the position in 2014, following failed ODM elections at Kasarani in February of the same year, when he was accused of being a mole and the infamous “Men in Black” disrupted the polls.

Ababu has also missed key Cord events, including those surrounding the death of controversial businessman Jacob Juma and the demonstrations against the IEBC.

His absences have fueled speculation about his estrangement from Cord.

Yesterday, LPK leader Ojiambo denied that Ababu and his team were due to take over her party.

“My party is not for sale,” said Ojiambo, who was Wiper leader Kalonzo Musyoka’s losing Presidential running mate in 2007.

“No one can afford the Labour Party, since our interests are the interests of workers who are millions in the country and want good governance,” said Ojiambo.

According to Ojiambo, her party remains intact but will form coalitions with like-minded parties at

She said the LPK remained focused, preparing for the coming elections and will continue its recruitment process of new members to become effectively competitive.

“The Labour Party is very organised and we will be looking forward to work with everyone to unite the country as we focus on our development agenda,” said Ojiambo.

Despite the Ojiambo denial, people close to Ababu confirmed that the deal was as good as done and the Budalang’i MP and his allies will not defend their seats in 2017 using the ODM ticket.

“I can assure you that we will not vie using the ODM ticket, we are considering the LPK,” said an MP involved in the talks.

Some observers view the move as yet another plot to split the Western Kenya vote ahead of 2017 and 2022. The Luhya have overwhelmingly voted for Raila at the last two elections.

Waluke has also been at the forefront calling for Luhya unity.

“Luhyas have been sidelined in ODM and we are not going to allow that to continue happening,” Waluke said.

“Ababu has failed to rally the party and has invented one excuse after another for failing to participate in party activities,” said Sifuna during a press conference of Western region ODM leaders held at Lillian Towers, Nairobi.

He criticised Ababu for being absent during the anti-IEBC protests when Cord leaders were being teargassed in the streets as they “pushed for electoral reforms”.

Sifuna accused Ababu of failing to create a team out of the people he was given to work with and instead choosing to “walk and work alone” .

He further criticised him for not drawing a clear line between himself, Jubilee and its leaders.

“Our secretary general has constantly flirted with the governing coalition to the confusion of our supporters,” said Sifuna.

He condemned Ababu for “trying to drag the entire Luhya community into his personal failings as a leader by accusing fellow leaders of undermining his leadership”.

“There is no shortage of talented Luhyas, including myself, who can take the seat that the party has reserved for us. We are ready and willing to serve this great party,” said Sifuna.

On his part, Nairobi ODM chairman George Aladwa said anyone who wants to leave the party should go. “They should stop threatening us with words: If they continue with impunity, we shall remove them,” said Aladwa.

Cord secretariat boss Norman Magaya and ODM leaders from Kakamega, Busia, Kisii, Nyamira and other Western regions were present at the conference.