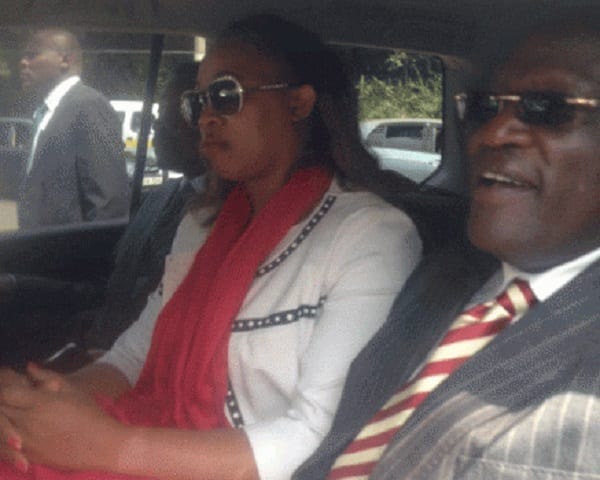 Machakos Senator Johnston Muthama’s wife broke down as she watched her husband being ushered into the Directorate of Criminal Investigations (DCI) offices for grilling over alleged hate-speech.

Jemima Muthama, clad in a red dress and a white blazer, accompanied her husband to the criminal investigations headquarters on Kiambu Road Tuesday morning and was overcome by emotions after watching her husband being ‘man-handled’ by flying squad officers.

The officers had gone to their home in Runda to pick the Senator, after Inspector General of Police Joseph Boinnet issued orders that they should appear for grilling at the DCI headquarters.

Mrs Jemima Muthama at the Criminal Investigations (DCI) offices where she accompanied her husband, Senator Johnston Muthama for grilling.

Who is Juliani and why the hullabaloo about him and Lilian…

When finally the vehicles carrying Mr Muthama and the officers from the squad arrived at the DCI’s gate, Mrs Muthama and his body guards were asked to disembark from the vehicles as only the Senator would be allowed into the offices to record statements.

Mrs Muthama could not hold back her tears and she kept wiping her face as her husband’s bodyguard and other politicians pleaded with the police to allow a few members of the family to accompany the senator.

She was allowed into the car and sat on the right side of her husband who kept claiming that the police had mistreated him.

Gideon Moi ‘betrays’ opposition after voting for the electoral laws