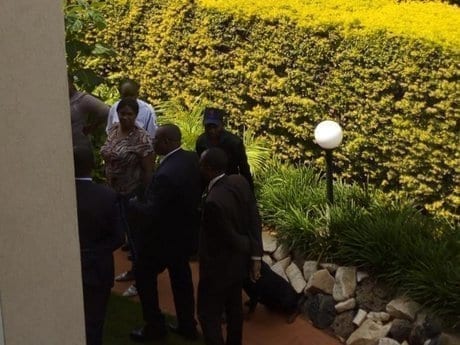 Meru Senator Mithika Linturi has once again forcefully ejected his wife from their matrimonial home in Runda.

Over 15 goons were seen trying to evict his estranged wife Maryanne Keitany.

According to the neighbour who recorded the incident, Linturi was supposed to go back to their home and pick his things accompanied by his children.

The men tried to access the gates but they could not manage to get in with some using rocks to break in.

Later on, they are seen trying to move Keitany’s car that was outside the gate.

In November, Linturi was embroiled in a feud with his estranged wife Maryanne Keitany over their matrimonial home in Runda.

The Nairobi court ordered him to stay away and not to sexually harass or threaten her.

Keitany is the former chief of staff in Deputy President William Ruto’s office.

She is now a business woman.

Last month Keitany obtained temporary orders allowing her to access their home after she claimed she had been thrown out.

Senior resident magistrate K.I. Orenge had issued several orders last month against the senator, barring him from the home.

Shades of Life:What sunglasses do you see life through?