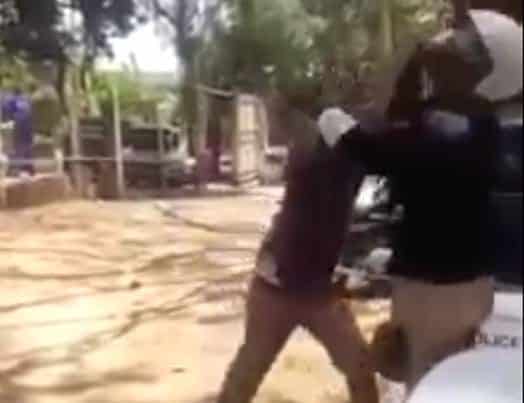 A two minute video has surfaced online showing a police officer in uniform assaulting a civilian and injuring him badly.

However, from the video, its unclear who started the confrontation but the male civilian can be heard asking the police officer why he had beaten him yet he found him at the parking lot.

The attempts to hit the police with a stone before the officer picks something on the ground and hits the civilian on the head which leaves him bleeding profusely.

The man still bleeding goes ahead and pushes the officer’s motorbike and sits on it before the officer picks him up and starts to give him first aid and lays him down in a shed.

In the background a man is heard begging with the officer to stop what he is doing, but it all falls on deaf ears of the officer.

VIDEO:Police Officer Falls from Vehicle During Protests In…

Three voters in court to block MPs swearing in

How Saudi dream job turned my daughter’s life upside down

Raila, Kalonzo assemble their troops at Wetangula’s home as rifts in Cord widen