A close ally of ODM leader Raila Odinga was on Tuesday evening thrust into the morphing National Youth Service scandal, introducing a fresh twist to possible beneficiaries of the contracts worth more than Sh1.8 billion in the past two years.

Suna East MP Junet Mohammed, whose official name is Junet Sheikh Nuh, was named by Jubilee lawmakers as one of the directors of Zeigham Enterprises Ltd, a company that supplied the agency with goods worth Sh21.8 million.

Fahaza Ltd, a company where his sister Hafsa Sheikh Nuh is a director, also bagged a contract worth Sh51.8 million, taking the total worth of contracts given to companies linked to the MP to Sh73.6 million.

Mr Mohammed is a member of the Public Accounts Committee, which is handling investigations into the matter.

Jubilee lawmakers were speaking at Parliament in what can be seen as a revenge attack against Mr Odinga, as Mr Mohammed is one of his lieutenants.

They said Ms Nuh is married to Hassan Noor, who was the chief of staff at the Devolution ministry. Mr Noor was also the chairman of the tender committee at the ministry.

They claimed their revelations were proof that Mr Odinga could also have been a beneficiary of funds through his ally Mr Mohammed and his history with Mr Noor.

Mr Noor was the Rift Valley provincial commissioner and chairman of a task force on the Mau Forest when Mr Odinga was prime minister between 2008 and March 2013.

Mr Noor was on Monday charged along with the agency’s former deputy director-general Adan Harakhe in connection with the award of a tender worth Sh47 million.

“It is in the public domain that Hassan Noor, a key suspect in the NYS racket, is a long-time aide of Mr Odinga. Indeed, as PM, Odinga forwarded Noor’s name to various committees… to represent his interests,” said Mr Ichung’wa.

He claimed most of the items supplied to the agency were smuggled into the country from Pakistan. He said these were powdered milk, rice, sugar and biscuits, among others.

There were also documents showing that ODM chairman John Mbadi, who, like Mr Mohammed, is a member of the Public Accounts Committee (PAC), was also a beneficiary of the contracts, claimed the MP.

Said Mr Sang: “Why is Mbadi obsessed with Farouk Kibet and [Elgeyo-Marakwet Senator Kipchumba] Murkomen, who are third-tier accomplices, when there are real beneficiaries in front of them?”

Mr Ichung’wa said the companies were paid “hundreds of millions of shillings” by the NYS for dubious supplies, most of which were smuggled into the country from Pakistan through the port of Kismayu.

It would therefore mean that the companies could have been involved in criminal activities such as smuggling and tax evasion in bringing the goods into the country through a closed border.

This would also mean that security and tax agencies that man the borders through which the goods passed could be complicit.

“All these people are intimately known to Odinga. All these facts are well known to Odinga. Without a doubt, there is much more that Odinga and his people know and have done that we will know in time,” said Mr Ichung’wa. 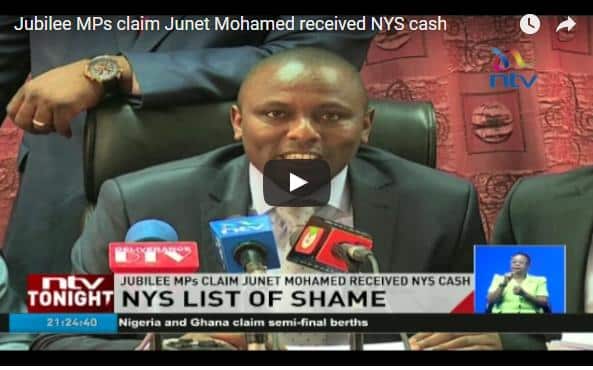 In the documents he gave journalists at the press conference as proof for his claims, Zeigham Enterprises Limited is shown to have been registered in July 2012.

Its directors are listed as Junet Sheikh Nuh, Hussein Mohammed Haji — both of them with post office addresses in Suna, Migori — and H.F Easterbrook.

Fahaza Limited is shown to have been registered in July 2014 with Hafsa Sheikh Nuh, Mohammed Sheikh Nuh and Michael M. King’ori, all of whom have post office addresses in Nairobi.

Zeigham Enterprises was shown to have supplied machine belts, submersible pumps and a centrifugal clutch cut section worth Sh21.8 million.

In printouts from the Integrated Financial Management Information System, Fahaza Limited is shown to have supplied grinders and their accessories worth Sh58.3 million.

Mr Ichung’wa said the documents would be handed over to the PAC and the Ethics and Anti-Corruption Commission.

“We want one Junet Mohammed to tell Kenyans who were the other people who got the money from the National Youth Service,” said Mr Ichung’wa.

Last week, Mr Mbadi wrote to PAC chairman Nicolas Gumbo to add to pressure from within the committee to have Mr Kibet, who is Deputy President William Ruto’s personal assistant, and Mr Murkomen meet the committee.

Mr Kibet has already admitted that when he sought a soft loan from Ben Gethi, one of the suspects alleged to have received the NYS money, Sh1.5 million was paid into his account by Josephine Kabura, another suspect.

Mr Murkomen has said the Sh15 million his law firm received from Out of the Box Solutions, which worked for the Planning Department but was paid out of NYS accounts, was to an account that holds money from clients. He said the money was then used to buy property.

Important Message to Kenyans Living in the United States

Video:Cheaters or teachers? Rise in sexual abuse cases in schools