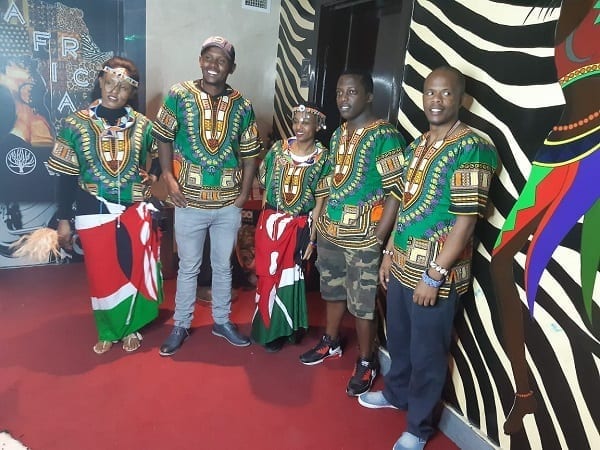 For some of the pacesetters of the vibrant Kenyan community in Qatar, it was an ideal way to close an eventful year. The Kenyan embassy in Qatar hosted a lunch reception to honour the Green Maasai troupe and the Kenyan football team in Qatar ‘for the commendable job they are doing at the Embassy Grounds, last week.

The event was organised by Galma Boru, ambassador of Kenya to Qatar, and the embassy officials for recognising and appreciating the Green Maasai Troupe a group of good samaritan Kenyan expats who are regularly involved in social work and charity events and the Kenyan Football Team in Qatar for their voluntary effort in representing Kenya in Qatar, and internationally.

Zacchaeus Njuguna, who heads the group, told Community, ‘It was a very positive gesture and a very good way to end the year. We really enjoyed our discussion forum with our ambassador about our voluntary green projects here in Qatar and he promised support. We also learnt more about investment opportunities because the embassy invited the head of diaspora banking, Vincent Aberi from Kenya Commercial Bank.

This helped us learn more about banking and investment. We also had the chance to ask questions about the new Qatar labour law and our embassy explained to us in detail about it. Moreover, they welcomed us in the embassy in case of any questions, so that we continue to stay updated about Qatar’s laws.

Tanul D C, Minister Counsellor and Deputy Head of Mission at the embassy, told Community, ‘The ambassador held an end of the year party by inviting a number of Kenyans. In his speech, the ambassador praised the Kenyan football team for promoting the image of Kenya through sports in Qatar. He also praised the Green Maasai, who performed traditional Kenyan songs and dances, for participating in environmental work, such as cleaning of beaches in Qatar, and thereby helping promote the spirit of Kenya in Qatar.

Among other things, ambassador Boru went through Njuguna’s Green Book, which has become somewhat of a hit in the community due to its frequent presence at various events. Njuguna’s hobby of collecting the day’s newspapers that the staff of the QP office where he worked at would have disposed of, would make him cut out stories and sections that he would paste on page after page in a diary.

These info-diaries — he calls them Kenyan Expat Green Books — helped his foray into the scene. ‘In 2011, I attended QP’s Environment Day celebrations and interacted with people to realise that a lot of things they were doing are what I was doing back home, says Njuguna, who worked as a volunteer at the Kenya Red Cross, and also a United Nations volunteer. ‘So I showed the QP staff my green books, which helped me socialise and discuss my ideas. It boosted my morale as every year, QP gave me the opportunity to share my ideas with people. So I began setting up a table with my green books.

Njuguna and his group is active throughout the year with community events. In October, Njuguna and his troupe celebrated the Mashujaa Day Mashujaa is Swahili for heroes. On this day, Kenyans around the world celebrate the valour of their forefathers who fought for Kenya’s independence and also the bravery of those whose courageous actions made Kenya proud. In Qatar, members of the Kenyan community gathered and bonded over ways and means to follow in the footsteps of the ‘heroes who fought for the well-being of their country.

Njuguna is greatly influenced by Wangari Maathai Kenyan environmentalist, founder of the Green Belt Movement (GBM), and the first African woman to receive the Nobel Peace Prize. To mark her death anniversary, Njuguna and other Kenyans in Mesaieed had planted trees to continue her legacy. Njuguna, a member of GBM which has planted more than 51 million trees in Kenya, had initiated the tree-planting drive at Mesaieed.

The group has also been part of various environment drives. Called ‘Turning waste into art, a bottle cap art project was thought up by Njuguna and two other Kenyan expats, Peter Kimani and Gabriel Kamiti. At a previous QP Environment Fair, they made murals of animals, fishes and birds using plastic bottle caps, and created a mural that raises environmental awareness using 60,000 caps, in collaboration with the Solid Waste Interest Group (SWIG) of the Qatar Green Building Council (QGBC), among many others.

I told NIS of the attack, says Sonko

Isaac Ruto among governors named in the list of shame