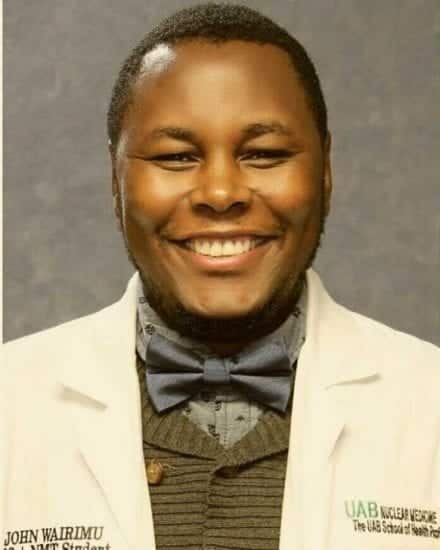 John Gitau Wairimu, 34, a Kenyan Based in Birmingham Alabama, and three other Americans will become the first four students in the whole of United States to earn masters degrees in Nuclear Medicine Technology. The four students are graduating from The University of Alabama at Birmingham UAB. This is the first Nuclear Medicine program to rise to master’s entry level in the whole of United States and the only Nuclear medicine technology program in the state of Alabama.

Nuclear Medicine Technology, which began in the 1950s is a branch of medicine that involves a peaceful use of radioactive drugs known as radioisotopes or radionuclides, premier molecular imaging tool that physicians use to diagnose, stage and treat diseases. This technology is mostly used in diagnosing and staging cancer, detecting heart defects and brain infarction but it is also used in all the other organ systems.

Wairimu, who also hold a bachelors degree in Public Health with a concentration in epidemiology from UAB, has been involved in various research projects involving environmental pollution in Birmingham area and hopes to pursue his PhD in Healthcare management in the Fall of 2018 .He hopes to conduct his research in ways to balance health disparities in Sub-Saharan Africa and other developing world.

“I feel privileged to to have pursued my studies in this great world known university hospital”. Says Wairimu. “ I have rubbed shoulder with some of the greatest scientists and Physicians in the World at the UAB, and having learnt from them, I feel ready and confident enough to go out there in the World and have an impact in someone’s life”.