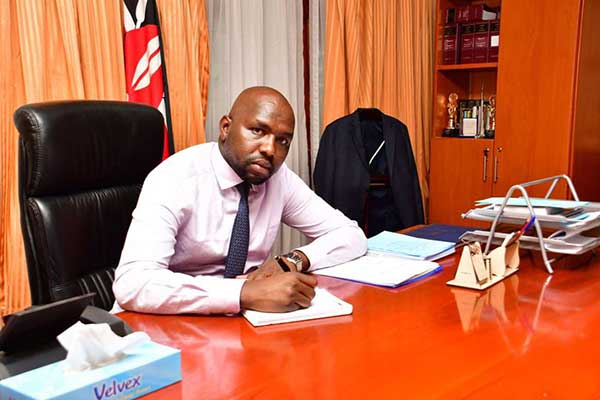 A last-minute call from President Uhuru Kenyatta yesterday saved Senate majority leader Kipchumba Murkomen from imminent removal from his lucrative parliamentary post over his comments on the Mau Forest evictions, seen to contradict the government’s position.

Sources told the Nation how the afternoon call from the Head of State prevented what was to be an announcement of plans to kick out Mr Murkomen out of the Senate top seat, in which he is supposed to champion the interests of the Jubilee Party and President Kenyatta’s government.

Mr Murkomen, the Elgeyo-Marakwet senator, on Saturday dared President Kenyatta to contradict him on the evictions, which he said were not only being done inhumanely, but which he claimed had also unfairly claimed as victims people outside the forest boundaries.

“Mr President, today, I want to tell these people that I have come here and I have seen their suffering. I want you to also come to Mau, and tell them whether you stand with (Narok county commissioner George) Natembeya, or the common man who gave you votes,” Mr Murkomen told an excitable gathering at Kitoben Primary School in Narok.

And, as if aware of what the statement might portend for him, and following a statement by Nairobi senator that he had disrespected President Kenyatta over his stand on the evictions, Mr Murkomen put his Senate leadership position on the line.

“I know that the president on whose behalf  I fought so hard, the same one we campaigned for against other people, cares for the people of Mau. So I want to tell you today, if tomorrow I get ejected from my job as Senate majority leader, it will because I talked on your behalf,” Mr Murkomen said, arguing that local officials had defied the government on the cutline.

On Sunday, Jubilee Party secretary-general Raphael Tuju threw Mr Murkomen under the bus, terming as personal his comments on the eviction, but appeared cagey on whether the senator would be reprimanded by the party for it. The party insisted that the eviction will go on, despite the resistance by Mr Murkomen and a section of Rift Valley leaders.

“The party has a disciplinary committee and they will analyse this. If they think they need to summon him, they’ll summon him,” Mr Tuju told journalists at Jubilee House in Nairobi yesterday. Mr Tuju, who was accompanied by party chairman Nelson Dzuya, termed as “not useful to the party” angry comments Mr Murkomen made when he visited the settlers twice in 72 hours, protesting what he said were inhumane treatment of the settlers.

“On the Mau Forest, a government must do what it has to do to conserve the Mau. If an individual politician, even if it is the Leader of Majority in the Senate comes with a different position, definitely the position of the Executive prevails,” said Mr Tuju. In Kilifi, deputy president William Ruto, whose June 24 order triggered the evictions called his troops to order.

“As leaders, we have a right to speak about the issues affecting the people because our primary duty is serving public interest. But we must always talk with each other with decorum and respect as we seek best solutions to issues,” Mr Ruto told an interdenominational service.

In Nairobi, county assembly speaker, Ms Beatrice Elachi, also called for calm from Jubilee Party leaders, saying that, while it was okay to protest against eviction of those outside the forest, politicians “should know that Mau is not for one tribe.”

The Nairobi senator, Mr Johnson Sakaja, whom Mr Murkomen had accused of angling for his job when he called him out over his comments on the evictions, yesterday said he was not interested in the job.

“Those saying we want to replace the Senate majority leader, it has not come to that. He is still our leader, but we just want him to recalibrate his ways so that as he leads us, he does not go against the party posiiton,” said Mr Sakaja.