When Cosmas Korir received a strange call, he was hesitant to pick as he was on his way home.

Little did he know that the person on the line would make a big announcement that will forever change his life.

Korir a cash crop director at West Pokot County who had previously entered a bet for seven games with sportpesa betting firm would later come to terms with news that he is the new millionaire in town. 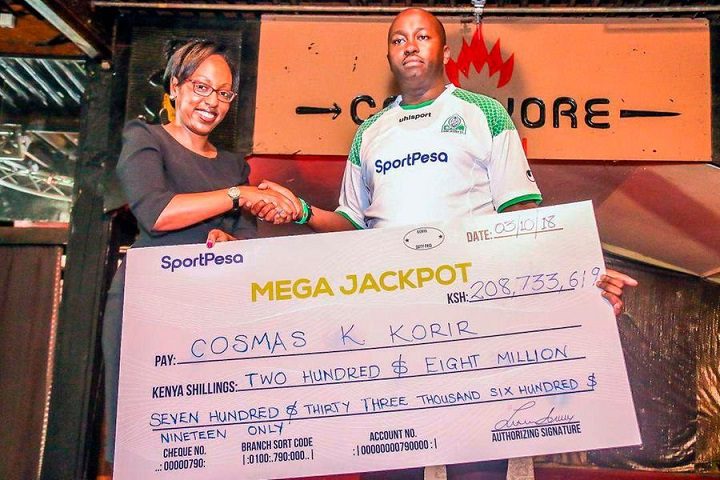 The jackpot winner vied for a parliamentary seat in Konoin constituency in Bomet County through Chama Cha Mashinani (CCM) ticket and lost.

Had he won the seat, he would have been earning an approximate salary of Sh700, 000 per month. Now his interest in betting has made him a millionaire.

Korir who spoke on Sunday on phone to SportPesa CEO Ronald Karauri revealed that his previous major win with the betting company has been Sh990 after using Sh100.

Speaking on Monday at his office where his colleagues paid him a visit, Korir narrated how he had cooperated with his friends to decide on the teams that they will place their bets on.

“We were three of us and as usual we sat down and strategized on the teams we should bet our money on. My friends did not have money, so I shared with them Sh200 so that they could bet on five teams each while I decided to bet on seven teams,” he said on a video circulating on the internet.

He added: “After placing our bets, we went on with our businesses. On Sunday, a strange number kept calling as I drove prompting me to answer and challenge the caller to wait until I arrive at my destination.

“The caller on the line announced to me that I was the mega jackpot winner. I stopped my car to digest the information I had been given. Initially as we placed our bets, we promised each other to share the price money.  I will still do the same to my friends who assisted me in selection of teams,” he said.

Social media was awash with congratulatory messages for the middle aged man whose fortune had changed after betting with Sh100.

On his facebook wall, where he is known as Korinyang Kipngetich Korir, he wrote:

Titus Suter on Facebook wrote: “I am sure politics is now irrelevant for him. Unless otherwise! Unless he’s interested in power and serving the people, I always believe you don’t have to be elected to a political office to make a difference,” he said.

His win comes at a time that the government has implimented 15 percent tax on betting, lotteries and price competitions.

Cher Ben another Facebook user said “The amount will be taxed and reduced by the state.”

Shazzie Too added “Korinyang Kipngetich Korir utatulipia tu hii Deni tunadaiwa upunguze, 208M ni mingi (You will assist us in paying the current public debt. Sh208 million is a lot), she told him.