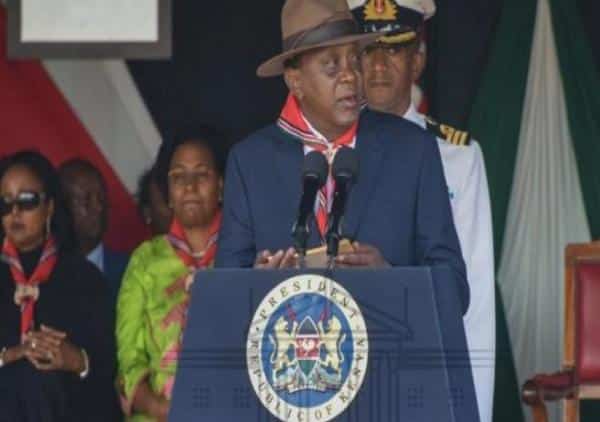 President Uhuru Kenyatta has issued a strong warning at KCSE students who were seen hurling insults at CS Fred Matiangi and Amina Mohamed.

The President said this on Saturday during this year’s Kenya Scouts Association (KSA) Patron’s Day, expressing concern over the Ambira Boys incident.​

“I equally send a very strong warning to those young fellows who think that they can indiscriminately involve themselves in negative activities.” Said the President.

The president restated that the government will not tolerate misbehaviour and indiscipline.

“We will not and shall not entertain indiscipline and abuse from our young people. You must learn to respect your elders, As I talk to you today, those boys are where they should be in order for them to be disciplined.” added the President.

Police have since arrested three of the eight Ambira Boys High School students.

Speaking to journalists, Inspector-General of Police Joseph Boinett said detectives are going after the rest of the boys to find out if they really cheated in the Kenya Certificate of Secondary Education (KCSE) examination.

“The juveniles have become people of interest, not because of insulting prominent persons but due to suspected involvement in examination malpractices,” said the Inspector-General.

The three arrested are in police custody.