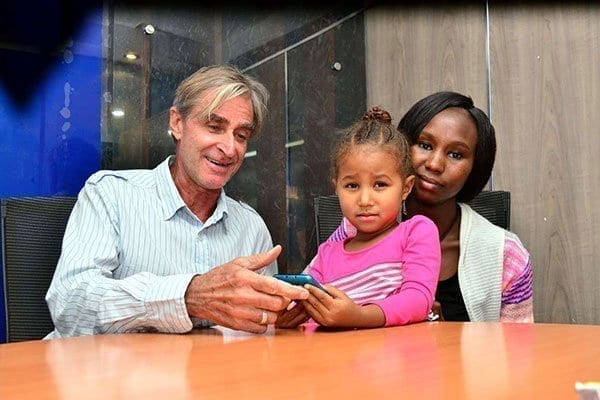 Mark Baur is a frustrated man. He has a Kenyan wife who is so near yet so far and it all has to do with immigration laws.

The Swiss national has been living in the country on and off for the past 16 years. He has a legally married wife, Lilian, with whom they have a four-year-old daughter.

He has accused the Immigration department based at Nyayo House of extortion, claiming that they are seeking to make Sh500,000 from him before he can legally live in the country with his family by granting him permanent residency status.

“I have about eight tourist visas in my passport from the past two years. Every three months I have to renew it,” the former musician and music producer said.

Every time he applies for a new tourist visa he pays $50 (Sh5,000). The Baurs have been married for the past two years, although they have been in a relationship for nine years.

Their daughter has a Kenyan birth certificate and passport.

The couple was advised to seek an alternative route to gain residency in the country. Mr Baur was told to apply for a dependant pass.

“This document is issued to a person whose spouse, parent or guardian is lawfully entitled to enter Kenya,” according to the Immigration department’s website.

“It is an offence while in possession of a dependant pass to engage in any form of trade or employment either for gain or not,” it adds.

Mr Baur was told that he would have to part with Sh100,000 every year for three years in order to obtain a Class K permit that allows him to live in the country.

This permit is granted to people who are not employed but have an annual income of more that $24000, which will be beneficial to the country.

Mr Baur said he was told he can apply for permanent residency after the three years are up and the process would take up to two years, in which he would still have to apply for the Class K permit.

“After those two years, it is not guaranteed that I would be granted the residency. It is very frustrating! The Kenyan government is basically trying to extort money from me so that I can be with my family,” Mr Baur explained to the Nation.

“I told them that I am the one who supports my family. I do not work, but I have an income from investments I have back in Switzerland,” he said.

He said that he finds it strange that the Constitution is so stringent yet he is legally married to a Kenyan.

“If we were applying for residency for my wife in Switzerland, we would get it in two weeks at no cost, because we are married!”

The Constitution also states that a foreigner can apply for permanent residency if he/she has been married to a citizen of the country for at least three years.

This year, according to Mr Baur, he would have been living in the country continuously for the past seven years and he would be legally married to a citizen for three years.

The couple applied for the dependant pass in May and went to Switzerland to look after Mr Baur’s aged mother. They came back after two months and went straight to Nyayo House for the document.

“When we got there we were told that that they had denied my application. I asked for the documents showing that my request for the pass had been denied but they told me that my file was lost and could not be found,” he said.

He was told that he would also have the option of applying for citizenship, but he had not been living in the country continuously for the past seven years.

“I have never he heard of any other country denying a family the right to stay together. It is very unfair. We have a home here, but I feel unwanted in this country. If this fails, then we might just have to leave and go to Switzerland.”

On Spiritual love: Should pastors date girls from the Congregation?

Aukot concedes to Kenyatta, asks him to unite the nation